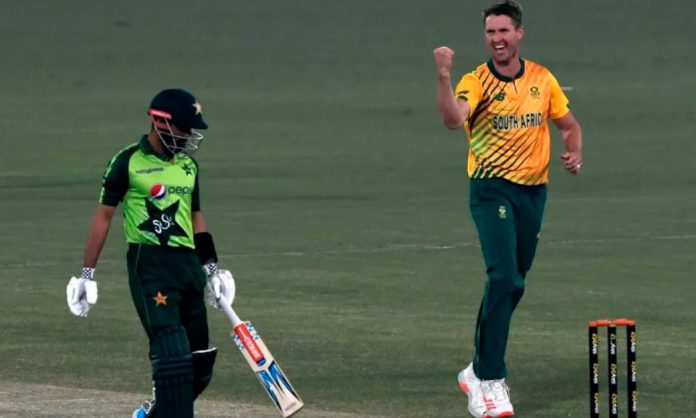 PAK vs SA 1st Innings Update: Pakistan and South Africa are competing In one of the most crucial matches of Group 2. In the must-win match for Pakistan, we saw the team making an amazing recovery. After winning the toss, Pakistan elected to bat first. The team scored 185 in the first innings at the loss of 9 wickets. South Africa needs 186 runs to win the match.

Pakistan has made a remarkable resurgence. They made a strong comeback from 43/4 in the seventh over to finish with a difficult total of 185/9. If the first six overs of the game were all about South Africa’s pacers, the final six overs of Pakistan’s innings were all about the Shadab-Iftikhar duo. Although Nawaz and Iftikhar helped to some extent to steady the ship, Shadab and Iftikhar completely destroyed all of the Proteas bowlers.

There were a lot of misfields and lost catches, and the wetness didn’t help their case either. Nortje, who had four wickets, was the best bowler, but as the game drew to a close, he bowled a few more deliveries that helped Pakistan over the 180-run threshold.

The bowling fell short of the edge they required. Nortje took 4 wickets while all other bowlers took 1 wicket each. None of the bowlers bowled at economy less than 7.75.

Only one six short of the 11 they struck against Scotland in Sharjah last year, Pakistan’s ten sixes are their second-highest total in a T20 World Cup game. Pakistan took advantage of Sydney’s more favourable batting conditions by hitting 10 sixes today. They only managed nine in the first three games in Perth & Melbourne.

PAK vs SA- What Players Said:

Anrich Nortje, talked about the South Africa innings. He said. “Happy with the start, at the end, may be too many boundaries at the back-end. I thought the wicket got better with rain coming, it didn’t get flatter, but the ball skidded a lot more. They (Ifthikhar and Shadab) kept on coming at us the whole time, it was a good test for us. I’m sure we can chase this score down.”