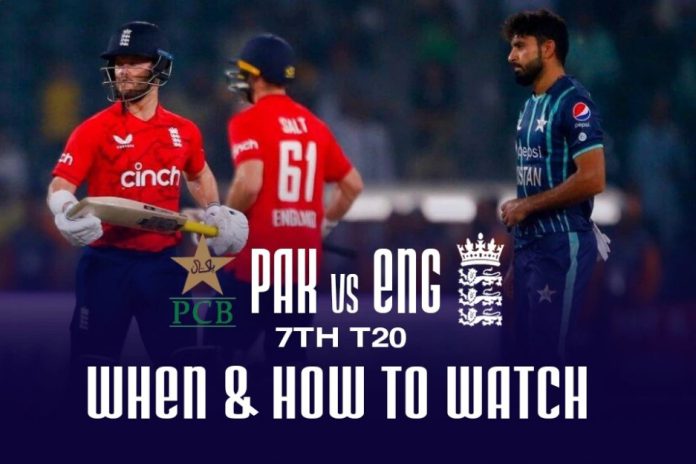 Pakistan and England are all set to lock horns one last time in the final T20I of the seven-game T20 international series at the Gaddafi Stadium in Lahore.

The hosts were leading the series after the fifth game, but Phil Sat’s explosion during the sixth game on Friday brought back England in series contention. Now series is at 3-3 and both teams will try hard to win the final match of the series on Sunday to claim the trophy.

Chasing a target of 170, Salt played a knock of unbeaten 88 off 41 that helped his side secure an easy 8-wicket win over the hosts with 33 balls to spare.

Both big teams are using this series as a preparation for the T20 World Cup, which begins next month, as they try to balance their team line-ups while taking into account the bouncy pitches in Australia.

After this series, Pakistan will first visit New Zealand to compete in a tri-series against Bangladesh and New Zealand that will begin on October 7. While England will take off immediately for Australia to play a three-match T20I series before to the World Cup.

The T20 World Cup 2022 will kick start from October 16. England is in Group A with Australia, New Zealand, and the other three teams. Along with Afghanistan and the other two teams that will advance.

While Pakistan, India, New Zealand, and Bangladesh are in Group B.

The English side would return to Pakistan for a three-match Test series in December after the T20 World Cup in November.

PAK Vs ENG 7th T20I: Players to watch out for

The key players to watch out for in the 7th T20 would be Babar Azam and Haider Ali as batters, Mohammad Rizwan as wicket-keeper. Mohammad Rizwan as an all-rounder. While Haris Rauf and Mohammad Wasim Jr. will lead the bowling department for Pakistan.

When and Where to watch the T20 series between Pakistan and England?

The seventh match of the seven-match T20 series between Pakistan and England will be played on September 30 at Gaddafi Stadium in Lahore.