Pakistan will be up against Australia for the second semi-finals in the ongoing ICC T20 World Cup 2021. The match is scheduled to be played on Thursday, November 11th at the Dubai International Stadium from 7:30 PM IST onwards. While Pakistan will enter the match as the favorites, the Baggy Greens are also very much in the game. Let’s have a look at the Dream11 choices if Pakistan bats first. Here is PAK vs AUS Dream11 Players.

Both the teams will want to bowl first in the crucial semi-final match. It will be safe to say if Australia wins the toss they will put Pakistan to bat first. However, Pakistan can still make it to the finals if they bat first in the semi-final. Pakistan have batted first in their previous two ICC T20 World Cup games before heading to the semis. The heavy metal Pakistani side scored 189 runs in both of the games. However, it was against modest teams like Namibia and Scotland, but Pakistan will be confident even if they are asked to bat first.

The deadly duo of Babar Azam and Mohammad Rizwan are must-have players in your team if Pakistan bats first. Both the players have a plethora of experience playing in the UAE as they are expected to hand Pakistan a solid start while batting first. Shoaib Malik knows how to change gears and he gave a glimpse of it Pakistan’s clash against Scotland. Aaron Finch and Steve Smith are expected to play key roles during Australia’s chase in the semi-finals. 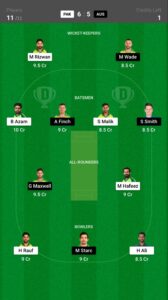 Disclaimer: Please note that our Dream11 team is based on our analysis and they do not promise fixed results.

Also read: Australia have won the toss and have opted to field against pakistan
Matched Content Ad