The Kane Williamson-led side emerged victorious against the visitors in a close contest at Bay Oval. The Kiwi bowlers stood tall against Pakistan as New Zealand won the contest by 101 runs. Kane Williamson and BJ Watling did the damage with their bat for the hosts to take a 1-0 lead in the two-match Test series.

Pakistan’s best batsman Babar Azam is likely to miss the second Test match as well. However, the tourists can keep their faith in Fawad Alam and Faheem Ashraf to carry the side in the absence of Azam in the second Test. As for the Kiwis, Matt Henry is set to replace Neil Wagner in the second Test. New Zealand will enter the clash as clear favorites. 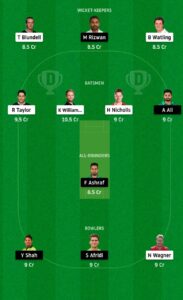 Our NZ vs PAK Dream11 prediction is that New Zealand will win the clash.

Disclaimer: Please note that our Dream11 prediction is based on our analysis and they do not promise fixed results.