Northern Warriors will be up against Deccan Gladiators in Match 18 of the Abu Dhabi T10 League 2021. NW vs DG is scheduled to be played at the Sheikh Zayed Stadium, Abu Dhabi on Tuesday, February 2 at 10 PM IST. Here are NW vs DG Dream11 predictions, previews, team, squads, and predicted XIs.

The Northern Warriors have excelled quite dominantly in the tournament so far. They have managed to grab three wins on the trot under the captaincy of Nicholas Pooran. The Warriors’ side has been the only team to clinch two wins while defending a total in the tournament so far. Lendl Simmons and Waseem Muhammad have played their part well in the team to help their side prosper smoothly in the league. As for Deccan Gladiators, their journey in the T10 league has been full of rough patches. However, the Kieron Pollard-led side can still turn their season around with an abundance of talent in their squad. 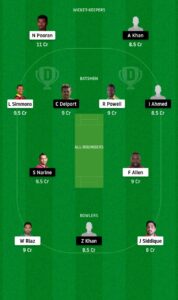 Our NW vs DG Dream11 match prediction is that Northern Warriors will win the clash.