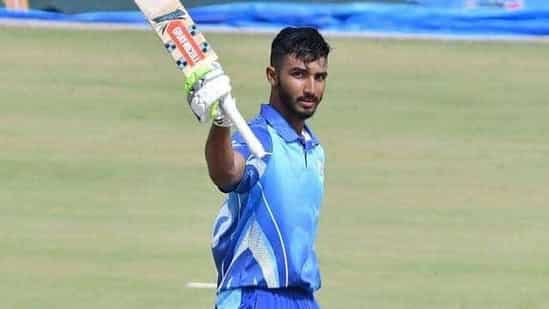 Devdutt Padikkal is most certainly going to be the next big thing in Indian cricket and there is no stopping to it. The 20-year-old batsman is currently bullying bowlers in the Vijay Hazare Trophy. Padikkal looks unstoppable at this moment as his panache with a bat in his hand is sky-high. Paddikal’s lowest total in this year’s Vijay Hazare Trophy is 52 and the highest is 152.

On Monday, the RCB starlet added one more feather to his hat as he completed his fourth consecutive century. He penned down an innings of 101 against Kerala in the quarterfinal of the tournament. He kick-started his campaign with a steady 52 against Uttar Pradesh and later missed out his century by just 3 runs against Bihar.

However, Padikkal recompensated it by scoring four back-to-back centuries at a trot. The first one came against Odisha when he scored a radiant 152. It was followed by an unbeaten knock of 126 against Kerala and another outstanding inning of 145 against Railways. His strong form has helped Karnataka top the Group C points table and reach the quarterfinals of the 50-over competition.

Netizens demand Padikkal be included in the ODI squad

4⃣th consecutive 💯 for Devdutt Padikkal in the Vijay Hazare Trophy! 🤯

673 runs from 6 matches including 4 hundreds and 2 fifties – Fantastic Devdutt Padikkal.

I think time has come to give chance to Devdutt Padikkal in both ODI and Tests.

Devdutt Padikkal is in a sublime form in this year’s #VijayHazareTrophy2021. Carrying forward his strong performance from the last tournament. At an age of 20, India is not short of future openers for the limited-over formats of the game. @bhogleharsha @BCCI

Karnataka has given many legendary cricketers to India.

Devdutt Padikkal will be the next#VijayHazareTrophy