Multan Sultans will be up against Karachi Kings in Match 16 of the 2021 Pakistan Super League. MUL vs KAR will be the first game of Thursday’s doubleheader at the Sheikh Zayed Stadium in Abu Dhabi. The game is scheduled to be played on 10th June at 6:30 PM IST. Here are MUL vs KAR Dream11 predictions, preview, squads, and predicted XI.

Imad Wasim-led Karachi Kings are on the top spot of the points table. They have managed to win three out of their first five games. They have maintained the best net run rate of 0.697 in the tournament. As for the Sultans, they are struggling in the 5th position of the points table with just one win in five games. Both the teams have faced each other six times in the tournament’s history and Kings have emerged victorious a total of five times. Kings will head into the game as clear favorites.

From the vault of #HBLPSL6 ‼️
👑 #KingBatsmen #BabarAzam & #SharjeelKhan struck the Highest Partnership of 1️⃣7️⃣6️⃣ runs in #HBLPSL so far 🏏
Checkout this montage of this special moment & lets support the #Kings in the remaining matches of #HBLPSL6 going to happen in #AbuDhabi 🏟️ pic.twitter.com/mzkI3QBhmH 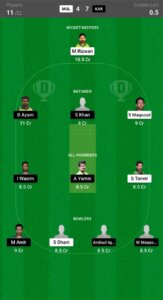 The Abu Dhabi pitch is a paradise for batsmen. The 2020 edition of the Indian Premier League, which was scheduled in the UAE, saw many high-scoring games in Abu Dhabi. The average first innings score was 162 (22 matches in IPL 2020 at the Sheikh Zayed Stadium).

Our MUL vs KAR Dream11 match prediction is that Karachi Kings will win the match.