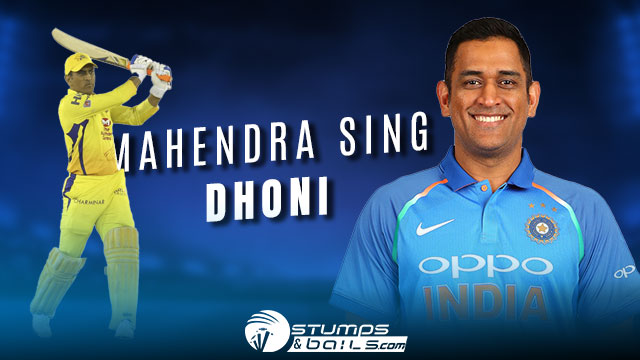 Mahendra Singh Dhoni popularly known as “MS Dhoni” or “Mahi” was born on 7 July 1981 in Ranchi, Bihar. He is a right-hand wicketkeeper batter. Dhoni was the captain of the Indian team in ODI and T20I from 2007 to 2017 and in tests from 2008 to 2014. MSD is often considered as the greatest captain in the cricket world and also the best Wicketkeeper batter in the world. He led India to 3 ICC trophies and won Asia Cup 2 times. Under his leadership, India won ICC Test Championship Mace 2 times. He also led his IPL franchise Chennai Super Kings to victory for 4 times in the history of IPL.

In the early days of his life, MS Dhoni started off as a goalkeeper in a football team. However, he was sent to play cricket in a local cricket club. In 1995 at the age of 14, he joined Commando Cricket Club and stood behind the stumps for the club for 3 years. From 1997 to 1998 he was selected for the Vinoo Mankad Trophy Under-16 tournament where he performed well.

In 1998, MSD started playing for the Central Coal Fields Limited team. In CCL, Dhoni’s mentor Deval Sahay used to give him fifty rupees for every six that he scored in the matches.

In 1999 Dhoni made his debut for the Bihar Ranji team at the age of 18. In the same year in Cooch Behar Trophy, the Bihar Under-19 team made it to the finals where Dhoni scored 84 runs. Dhoni scored 488 runs in 9 matches.

After giving good performances in Ranji Trophy Dhoni was picked to represent East Zone. At that time, Dhoni was scouted by BCCI’s small-town talent-spotting initiative.

For his constant efforts, he was picked up in the squad of India A against Zimbabwe XI. He showed his wicketkeeping skills in the match by taking 7 catches and 4 stumpings. In a tri-nation tournament with Pakistan-A and Kenya-A, Dhoni scored 362 runs in 6 innings.

On the International level, India was struggling for a good Wicketkeeper batter who can also fit with the team combination. MS Dhoni was picked up in the ODI squad against Bangladesh in 2004-05. He made his debut in the first match but got run out on 0.

In December 2005, Dhoni made his test debut against Sri Lanka.

Due to his magnificent knocks, Dhoni was ranked number 1 in ICC ODI Rankings in 2006. He became the fastest batter to achieve the feat in just 42 innings. He was also named in the World ODI XI by ICC in 2006. In the same year, he made his T20I debut against South Africa.

After losing in the World Cup 2007, Dhoni faced criticism as he scored just 29 runs in the tournament.

Just before the T20 World Cup in the same year, Dhoni was named captain of the T20I team. India won the inaugural T20 World Cup under the leadership of MS Dhoni. His cool-headedness in the final stages of the tournament helped India in lifting the trophy.

In 2011, Dhoni led India to their 2nd World Cup title after 1983. Dhoni’s contribution to the finals was marked in history.

In 2013, MSD led his team to win ICC Champions Trophy. He became the only captain to win all three ICC trophies.

In 2014, Dhoni stepped down as the captain from the tests. Next year, he led his team to the semi-finals of the ICC World Cup 2015.

In 2017, Dhoni stepped down as the captain of India in the limited-overs format. However, he maintained his position in the team as an important member till the 2019 Cricket World Cup when India ended up their journey in the semis.

Dhoni announced his retirement from International Cricket on 15th August 2020.

In 2015, CSK was banned for 2 years. Then, in 2016 Rising Pune Supergiants made Dhoni captain of their team.

In 2018, when CSK returned to IPL, Dhoni was directly appointed as the captain of the franchise.

He was retained by the franchise ahead of the auction for TATA IPL 2022. Later, he stepped down as the captain on 24 March 2022.

In Tests, Dhoni has played 90 matches and scored 4876 runs with 6 centuries and 33 half-centuries.

· Most Matches as a captain in T20Is.

· Highest score (183 runs) by a wicketkeeper batter in ODIs.

· Most consecutive innings (84) without a duck.

· Most International matches (332) as captain.

· Most runs in ODI history batting 6 or below.

· Captain and wicketkeeper of ICC Men’s ODI team of the decade.

· Captain and wicketkeeper of ICC Men’s T20I team of the decade.

Dhoni was born in a Hindi Rajput family. His father Pan Singh worked in junior management positions at MECON. His mother name is Devki Devi. Dhoni was the youngest among the 3 siblings with elder brother Narendra Singh Dhoni and sister

Jayanti Gupta. Dhoni married to his school friend Sakshi Singh Rawat on 4 July, 2010. The couple were blessed with a daughter on 6th February 2015.

2. When did Dhoni retire from cricket?

Dhoni announced his retirement from International Cricket on 15th August 2020.

3. How many years has Dhoni captained India?

4. How many trophies Dhoni had won for India in ICC tournaments?