Melbourne Renegades and Perth Scorchers are all set to lock horns in the 39th match of the Women’s Big Bash League at the Junction Oval Australia on Saturday. Let us look at MR-W Vs PS-W Dream 11 Prediction in detail.

Perth Scorchers after winning 5 out of 10 currently standing in the fourth spot with 11 points and a win here are necessary for them to remain in knockout contention.

Renegades who are currently standing at no 7 with 5 points will have a chance to roll up the table if they managed to win this match and they will try their best to claim a victory in this game.

The game between Melbourne Renegades vs Perth Scorchers women will be telecasted on Star Sports Network. Fans will be able to watch the live streaming of MR-W vs PS-W match on Disney+Hotstar app.

The pitch at the Junction Oval looks good for batting. The batters enjoy batting on this surface as the ball comes nicely onto the bat. The bowlers will have to be disciplined with their lines and lengths while bowling on this surface.

According to weather forecast, the weather will remain in support of a free conduct of the game as it will remain sunny throughout the game time.

The Melbourne Renegades Women are languishing at the bottom of the points table and will have to fire in unison on Thursday against the Sixers Women.

Toss will play a crucial role, as in the last 3 games the batting first team won only a single game while the chasing team won 2 games. So, the team that wins the toss will most likely to choose bowl first. Perth Scorchers is likely to win the toss.

Maddy Green valiant show went in vain in the last game against Brisbane Heat. She fought extremely hard in the run-chase and scored 58 runs at a strike rate of 109.43.

Hayley Matthews is one of the finest all-round cricketers in the world at the moment. In 10 matches in this competition, she has scored 180 runs at an average of 18 and picked up 5 wickets at a healthy economy of 7.31.

Alana King continues to pick wickets for Perth Scorchers in this tournament and more importantly keeping things tight at her end. In 9 innings, she has scalped 13 wickets at an economy of 5.48 with the best figures of 3 for 15.

Beth Mooney is slightly out of touch as she managed to score only 8 runs in the last 2 matches. She is still the leading run-scorer for Perth Scorchers in this tournament with 266 runs in 9 innings.

The best is yet to come from Sophie Devine in this competition. In 9 innings, she has scored 119 runs at an average of 14.87 and scalped 6 wickets at an economy of 6.84. 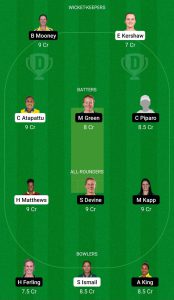 M Green and H Matthews can be the choice of captain and vice captain. 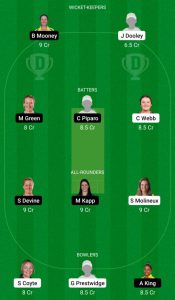 Following back-to-back losses, Perth Scorchers are again under pressure, but Melbourne Renegades have been one of the biggest underachievers in this season’s WBBL, winning just twice so far. The fact that Perth’s batting fire is significantly better than the Renegades’ should serve as the impetus for Sophie Devine’s team to win the game and return to winning ways at a key moment.