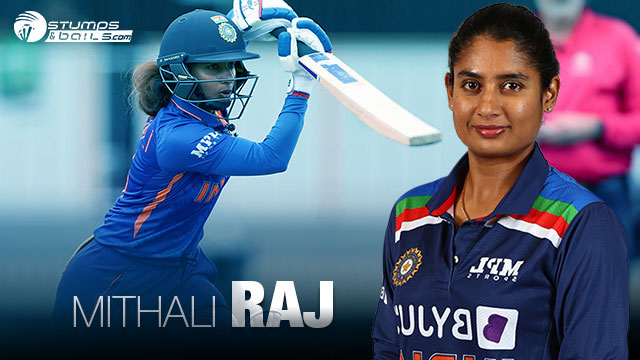 Mithali Raj started playing cricket at a very young age of 6. She along with her brother started coaching in early days. She did her schooling in Keyes high school for girls and attended Kasturba Gandhi Junior College in Secunderabad. Mithali was keen on becoming a Bharatanatyam dancer in her early days.

In an interview later, Mithali’s mother revealed some unknown facts about her. She told her that she was very lazy in her childhood who always enjoyed her sleep. However, when she started to accompany her brother to his cricket coaching, she gave up her habit of sleeping late.

Mithali used to visit along with her brother Mithun to his academy, Mithun’s coach Jyoti Prasad saw her playing on the field. After a while, he insisted Mithali’s parents to take her daughter to Sampath Kumar’s girls cricket Sports Glory Club.

Under Sampath’s guidance, Mithali became the youngest player to play for the state in the sub-junior’s tournament at the age of 9 years.

Mithali was selected in the junior and senior state teams. Later began her domestic career by playing for Railways. She started off her career with legendary Indian cricketers like Purnima Rau, Anjum Chopra and Anju Jain.

In 1997 Women’s Cricket World Cup, Mithali Raj was selected as one of the probables at the age of 14 but she couldn’t make it to the final team.

Mithali made her debut on 26 June 1999 in ODIs against Ireland and scored her maiden century on her debut match. She became a crucial member of squad since the beginning of her career. She made her test debut in 2002 against England where she got run-out on 0.

In the third test match of her career, Mithali broke the record of highest individual Test score by scoring 214 runs against England that too at the age of 19 in 2002.

Due to her medical conditions she was left out of World Cup squad in 2002. In 2003, she was honored by Arjuna award. With the time, Mithali had proved to be the most promising player in India. Mithali led India to the finals in World Cup 2005 but got defeated by Australia in the finals.

On 5 August 2006, Mithali made her debut in T20Is against England and scored 28 runs. During the series against New Zealand in 2019, she became first women cricketer to play 200 One day International matches.

centuries and 11 half-centuries. She has the highest score of 109 in World Cups. Mithali is the second highest scorer in the World Cup history.

In ODIs, Mithali Raj has played 231 matches and scored 7737 runs with 7 centuries and 63 half centuries.

In Tests, Mithali has played 12 matches and scored 699 runs with 1 century and 4 half centuries.

· First women cricketer to score 7 consecutive half centuries in ODIs.

· First Indian Women cricketer to score more than 10,000 runs in all the three formats.

· Highest run scorer in ODIs in the world.

· Arjuna Award in 2003 for prolific performance in sports.

· Appeared on the cover of Vogue India Magazine alongside Nita Ambani and superstar Shah Rukh Khan.

In the past few years, world has seen some biopics and the movies on the Cricketer’s life or the greatest achievement in the history of cricket such as ‘MS Dhoni – The Untold Story’ (Mahendra Singh Dhoni’s life) and ‘83’ (historic victory of Indian team in World Cup 1983).

Adding to the list, teaser of ‘Shabaash Mithu’ was released on March 21. The movie is dedicated to veteran Indian star player Mithali Raj. Actress Taapsee Pannu will be seen portraying the role of Indian skipper Mithali Raj in the movie. Mithali has been a pillar of Indian Cricket over the last 20 years, and saw a lot of highs and lows in her long career.

Mithali Raj was born in Jodhpur, Rajasthan. Her father Dorai Raj was a warrant officer in Indian Air force. Her mother Leela Raj is a homemaker. She started playing cricket with her brother in school days.

Mithali Raj has not named anyone as her boyfriend till now.

2. What is the salary of Mithali Raj?

3. How many runs Mithali has scored in ODIs?

In ODIs, Mithali Raj has played 231 matches and scored 7737 runs with 7 centuries and 63 half centuries.

4. When did Mithali Raj retire from cricket?

Mithali Raj took retirement from T20Is in 2019. She is still playing as a captain for India in Tests and ODIs.

Mithali was presented with Arjuna Award in 2003 for prolific performance in sports.

6. How many runs Mithali has scored in World Cup?

Mithali has scored 1321 runs in 36 matches in the Women’s World Cup matches with an average of 47.17 with 2 centuries and 11 half-centuries.