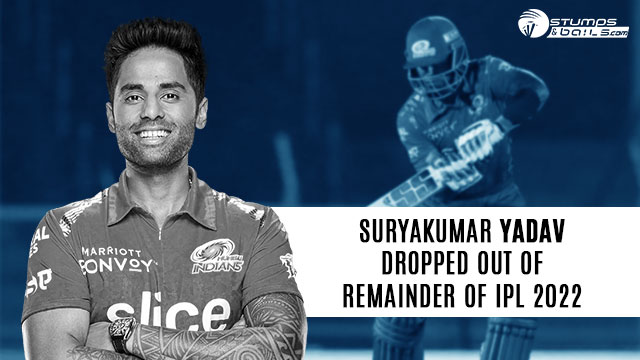 Mumbai Indians middle-order batsman Suryakumar Yadav has been ruled out of Indian Premier League 2022, the franchise said in a statement released on its official Twitter account on Monday.

The announcement came just a fewminutes before the clash between Mumbai Indians and Kolkata Knig ht Riders. The skipper, Rohit Sharma, announced that Ramandeep would be replacing Yadav.

“We just felt having a score to chase will be good. Every game gives us a new opportunity to put the right foot forward and hopefully we continue the momentum of the last two games. Surya is injured, Ramandeep comes in his place,” Rohit said during the toss.

Mumbai Indians elected to field first after winning the toss in the 56th match of IPL.

Yadav suffered a left forearm muscle injury during the clash against Gujarat Titans on May 6.

“Suryakumar Yadav has sustained a muscle strain on the left fore arm and has been ruled out for the season. He has been advised to rest, in consultation with the BCCI medical team,” the franchise said in a statement.

Suryakumar Yadav has sustained a muscle strain on his left fore arm, and has been ruled out for the season. He has been advised rest, in consultation with the BCCI medical team. pic.twitter.com/78TMwPemeJ

Of the eight matches played so far in the IPL, Yadav overall score stands at 303 with a best of 68 not out. His batting average of 43.29 and the strike rate of 145.67 makes him one of the key contenders for the Orange Cap.