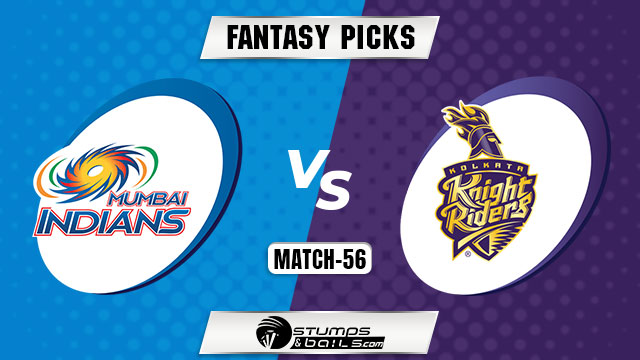 The clash between Mumbai Indians and Kolkata Knight Riders would be for the second time on Monday. As the top two teams have almost confirmed their berths for playoffs, the race for third and fourth positions is going on still.

To an extent, Royals’ berth is seemingly almost finalized in the top 3, the competition for the fourth is in full-swing. Mumbai and Kolkata, though, are going to play without any hopes for playoffs, the spirit of winning the game is likely to be unchanged.

The MI showcased a winning performance in its previous match by defeating Gujarat. It was Rohit Sharma and Ishan Kishan the top performers who went against Gujarat bowlers in an attacking style.

In the middle-order, Tim David’s contribution helped Mumbai to cross the 170-mark a point of reconsideration for the opponents in the coming matches in terms of scoring high runs. Similarly, Daniel Sams and Murugan Ashwin are continuing their good pace, but the Bumrah’s magic pace is yet to take its shape.

Meanwhile, Riders are expected to show some good performance. Though the chances to reach top 4 are almost dead, the blue and golden brigade will try to shine in order to upkeep its past glory.

The top-order’s inconsistency remains as a matter of a concern. Specifically, the issue of opening batting pair is still at an unsettling stage which makes KKR’s opponents to dominate since the beginning, in every match. Pat Cummins’ comeback can really help the team but his return to the squad still remains skeptical.

Besides, the bowlers, Tim Southee and Sunil Narine, are proving to be the wicket-takers at right time. With this scenario, the match 56 could be an interesting factor for the two teams, settled at lower-ranks of the table, how they continue to strive to show their winning legacy.

The pitch surface is neutral with a good scope for batsmen and bowlers to explore and exploit the match conditions. As the deck contains a bouncy regions, the bowlers can take the advantage to show their dominance. The batsmen, too, have good scope to enjoy the hitting on this track.

The opening batting pair in both the teams are not in good form. It could be MI which can take over the game if what is being perceived about Rohit Sharma’s and Ishan Kishan’s comeback performance in their last match is considered to be true. Indrajith and Finch are not able to cope up in this IPL and this shows impact on the lower order. In most of the matches against KKR, MI was always dominant in the death overs. The average projected score could be in 60 runs or beyond in the case of MI. The number could be lower in the case of KKR.

The Mumbai franchise always stood at higher level while playing against KKR. The average projected score in the case of MI could be around 170 runs. If KKR makes any dominant opening, the score can reach 190-run mark, too. There is no doubt, this match falling at the time when two teams are focused on keeping up their winning legacies, the total score can be registered either lower or higher.

Since 2008 of the Indian Premier League, the total matches held in between MI and KKR were 14. Of them, the MI team registered 10 wins and KKR has won 4 games. Considering the overall performance in the 15th season, the KKR is performing better than MI. However, MI can show more dominance if it continues to show its performances executed in its last two matches. If such is the case, MI would register a win.

Kolkata Knight Riders stands at ninth position in the IPL points table by winning 4 of the total 11 games played. Whereas MI is at the tenth position and it has lost eight and won two games. If the batsmen of top-order from MI helps in ticking the scoreboard since the beginning with the bowling team contributing with its full positive strength, then this match could be of a tight winning contest. Considering the performances from both the teams, the MI has an edge over KKR.

SRH VS PBKS: Punjab Ends Campaign on a High Note