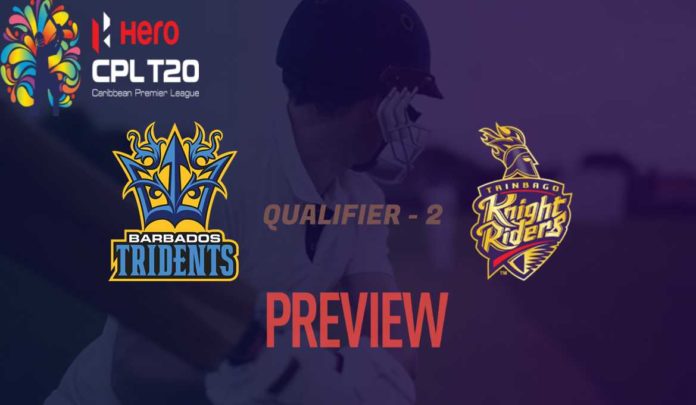 Trinbago Knight Riders will play against Barbados Tridents in the second qualifier of the Caribbean Premier League 2019 final.

Trinbago Knight Riders discovered form at the right time which could help them defend their title, as they defeated St Kitts & Nevis Patriots in the eliminator, helped by half-century by Lendl Simmons and their brilliant bowling display.

On the other hand, Barbados Tridents lost to Guyana Amazon Warriors, thanks to Brandon King’s performance. This, however, is another chance for them to reach the final, as they defeated Trinbago Knight Riders twice during the league phase.

Alex Hales: Hales will look to attack from the very first ball. He needs the support of Hope and Carter in the second half of the innings.

Hayden Walsh: Walsh has had a promising stint. He will expect Jason Holder and Shakib Al Hasan to put pressure on the batsmen.

Lendl Simmons: Simmons has been the pivot around for the Trinbago Knight Riders batsmen in 2019. Kieron Pollard and Denesh Ramdin will have to chip in by scoring briskly in the slog overs.

Sunil Narine: Narine continued to baffle batsmen in the Eliminator. Chris Jordan and Ali Khan must carry on from where they had left in the last game.

The wicket at Brian Lara Cricket Academy has something on offer for both the batsmen and bowlers in equal measure. A score of more than 150 should be a fighting total.
Although rain may play spoilsport, it is expected that the skies will be clear in the second half of the match.