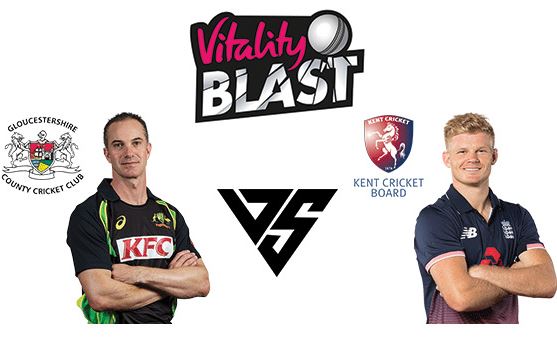 In their bid to move one step closer to the quarter-finals, Kent Spitfires and Gloucestershire will lock horns in this South Group fixture of the Vitality T20 Blast 2019. The match will be played on August 29 at the St Lawrence Ground in Canterbury.

Gloucestershire and Kent currently have 14 points in their kitty and a couple more points here will really bolster their chances of qualifying for the knockout round.

While the former is coming on the back of a convincing 25-run victory over Somerset at Bristol, the latter suffered defeat in their previous match against Surrey at Canterbury by the narrowest of margins – 1 run.

Gloucestershire, after putting up a challenging 189 on the board, bowled Somerset out for 164. Kent was given a stiff target of 172 by Surrey and they came so close at the finishing at 170/3 in their 20 overs.

The toss-winning team has batted first and gone on to win in each of the three completed matches that have been played at this ground so far this season. The pitch has seemed to become a tad slower during the second half of every game and so the team that wins the toss here on Thursday is likely to go with the trend of batting first.

It is likely to be cool and clear weather on Thursday evening with a gentle breeze blowing across the ground. Temperatures are expected to be in the range of 15-19 degrees Celsius. Humidity should be around 61-81% and the chances of precipitation are very low.

The St. Lawrence Ground has hosted three completed matches so far in this year’s Vitality Blast and has seen scores of 150+ on five occasions (thrice by the side batting first and twice by the side batting second). This goes to show how good the wicket has been for batting and a similar surface is expected to be prepared for this game.

Kent and Gloucestershire have both looked impressive this season and both are strong contenders for a top-four finish at the end of the group stage. The latter clearly have the upper hand when it comes to the recent head-to-head record, having beaten the former in their last five attempts straight. Apart from that, they are coming into this game with the psychological advantage of having secured a convincing victory in the reverse encounter at Bristol earlier this month.

Kent, however, have the home advantage on their side and having won six of their last nine completed T20s here will surely give them plenty of confidence. Their batting has more firepower than that of Gloucestershire’s and the signing of South African star batsman Faf du Plessis is going to further boost their performance with the bat. Kent may have been beaten by Gloucestershire last time but we are backing them to exact their revenge come Thursday.