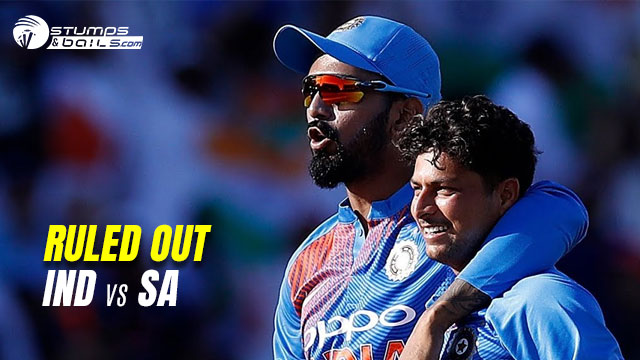 As India is ready to lock horns with South Africa tomorrow, we have concerning news in the Indian Camp. It has been reported that KL Rahul and Kuldeep Yadav have been ruled out of the series due to injuries. Rishabh Pant will replace Rahul as the team captain.

The freshly appointed captain who was supposed to lead the team in the absence of Rohit Sharma, KL sighted groin injury as the reason to miss the chance. Kuldeep Yadav also picked up a hand injury while practicing batting in the nets.

Rishabh Pant who was appointed the vice-captain of the team will now lead in absence of Rahul. Hardik Pandya has been appointed as vice-captain.

While KL had a win percentage of 46.8% as a captain in IPL, Rishabh Pant’s win percentage is 61.76. Hardik Pandya who recently led his team Gujarat Titans to IPL victory in the first IPL has the best record of 73.3%. The decision looks like a good one in absence of KL who had the experience of leading the team earlier as well while it is the first time Rishabh Pant will be donning the captain’s hat for the national squad.

This new development will also affect India’s batting lineup as KL has been a consistent opener for India and has performed very well for the team. The team will have to look for an opener to immediately replace him. Venkatesh Iyer or Ruturaj Gaikwad are expected to open the innings with Ishan Kishan. There has been no new addition to the team after the exit of KL and Kuldeep from the 18-member squad.

The now 16 member looks as follows:

India will play their first T20I against South Africa in Delhi’s Arun Jaitley Stadium on 9th June, Thursday. India is also chasing the record of winning the most consecutive (13) T20I matches.