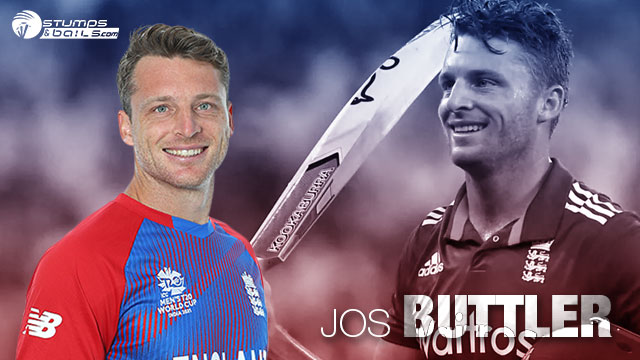 Jos Buttler in full, Jos Charles Buttler (born on 8 September 1990 in Taunton, Somerset, England) is an English right-hand wicketkeeper batter. Jos has been a crucial member of the England team in all three formats of Cricket for almost the past 10 years now. He is also the vice-captain of England in the limited-overs format. Buttler has the ability to open the innings as well as bat in the middle order. He has a record of most catches and stumpings in ODIs and T20Is for England. Buttler plays for Lancashire in first-class cricket in England and he is a part of Rajasthan Royals in TATA IPL 2022.

Jos Buttler started playing cricket at a very age of 7 years. He did his early schooling from Hugh Sexey Church of England Middle School, Blackford. After developing cricketing skills Jos made his way to King’s College, Taunton where he showed his talent for the first time. With the years, Jos started performing on the college level and got selected for Somerset. He appeared for the club in Under-13, Under-15 level. He also got picked up in the Under-17 level for the same club. In 2006, while playing for King’s College, Buttler was the leading run-scorer for the season. He was made captain of his college team in 2008 and he smashed 851 runs in the season most by any player.

After performing well for his College, Jos Buttler made his first-class debut for Somerset in County Championship against Lancashire in 2009.

In 2010, Buttler was appointed as the full-time wicketkeeper batter for Somerset. In his 4th County match, Buttler smashed his maiden first-class century and then a half century in the next match. Buttler earned his first Man of the Match award in 2010 for Somerset.

In 2010 and 2011, Jos Buttler was named as the most Promising player of the season for Somerset.

In 2013, Jos ended up his contract with Somerset and joined Lancashire. In June 2014, he smashed his maiden century for Lancashire.

In May 2016, Buttler extended his contact with Lancashire for 3 more years.

Jos Buttler made his international Debut in August 2011 against India in a T20I. However, he didn’t get a chance to bat on his debut.

He started off playing as the regular wicket keeper batter for the side in T20Is before making a debut in ODIs in 2012 against Pakistan. He didn’t have a dream debut and got out without scoring any run.

In 2012 Men’s T20 World Cup, Buttler was named in the squad and played all the 5 matches for his team. However, he only managed to score 40 runs in 5 matches.

He made his maiden T20I half century against New Zealand 2 years after his debut in 2013. Buttler earned his place as a regular wicketkeeper in the English side in the limited over formats.

In 2014, Jos made his maiden ODI century at Lord’s against Sri Lanka. He smashed 121 runs off just 61 runs. In the same year, Buttler made his test debut against India in July and scored 85 runs on his debut in first innings.

He was included in the squad for Cricket World Cup 2015, but England had a disastrous run in the World Cup and failed to make its place in knockouts. Jos played some fine innings in the World Cup for his team scoring 39 off 19 balls against Sri Lanka and 65 runs against Bangladesh.

In an ODI series against Bangladesh in 2016, Buttler was appointed as the captain of the side in absence of few crucial members. The series was remembered as a controversy for Buttler as he and few Bangladeshi players were indulged in a heating argument on the field.

In 2018, Jos Buttler was appointed as the vice-captain of all the three formats for England. In the same his scored his maiden test century against India.

In 2019, he scored his career best score of 150 runs in an ODI against West Indies. He smashed 12 sixes in the match most by any English player in an ODI.

He was appointed as the vice-captain of England for ICC Cricket World Cup. Buttler played a crucial role in England’s campaign of World Cup title. He played an important innings of 59 runs in the final against New Zealand.

Jos Buttler scored his maiden T20I century in the ICC Men’s T20 World Cup 2021 against Sri Lanka. He is the first English batter to score a century in all the three formats of cricket.

Jos Buttler has played in many T20 leagues all over the world including Indian Premier League and Big Bash League.

Jos first played his T20 franchise match for Melbourne Renegades in 2013 Big Bash League. He played 5 matches in the season.

In 2016 and 2017, Buttler was bought by Mumbai Indians in Indian Premier League.

In 2017, he was roped in by Sydney Thunder for Big Bash League and played 6 matches in the season including 2 half centuries.

In 2018, Buttler was bought by Rajasthan Royals in the mega auction of Indian Premier League. He emerged as the leading run scorer for his team in 2018.

In 2019, during a match in IPL, he got run out by R. Ashwin by ‘Mankading’ that led to a huge controversy on the international level.

In 2020, he scored 328 runs in 14 matches including 2 half centuries for Rajasthan Royals.

In 2022, Buttler was retained by Rajasthan Royals for 10 crores ahead of the mega auction for TATA IPL 2022.

In Tests, Jos Buttler has played 57 matches and scored 2907 runs including 2 centuries and 18 half centuries.

In ODIs, Jos Buttler has played 148 matches and scored 3872 runs including 9 centuries and 20 half centuries.

In T20Is, Jos Buttler has played 88 matches and scored 2140 runs including 1 century and 15 half centuries.

In IPL, Jos Buttler has played 72 matches and scored 2459 runs including 4 centuries and 13 half centuries.

· First English batter to score century in all three formats.

· Young Wisdon School Cricketer of the year in 2010.

· Honored with Member of Most Excellent Order of the British Empire in 2020.

Buttler was born in a Christian family. His father John Buttler was a Physical Education teacher and mother Patricia Buttler is a home maker. He has a brother and a sister. Jos Buttler got married to Louise Webber in 2017. The couple were blessed with a daughter in 2019 and then with second girl in 2021.

Jos Buttler got married to Louise Webber in 2017. The couple were blessed with a daughter in 2019 and then with second girl in 2021.

2. When did Jos Buttler made his debut for England?

Jos Buttler made his international Debut in August 2011 against India in a T20I.

3. How many runs Buttler has scored in IPL?

In IPL, Jos Buttler has played 72 matches and scored 2459 runs including 4 centuries and 13 half centuries.