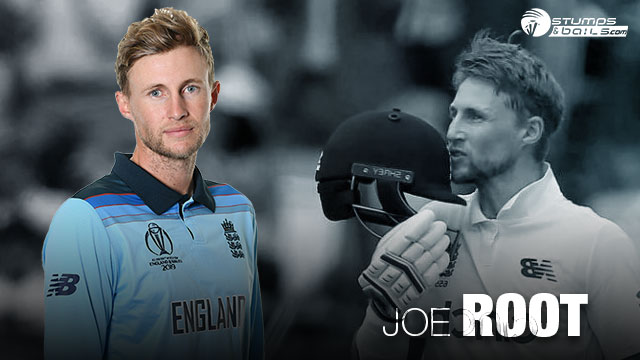 Joseph Edward Root, wildly known as Joe Root, was born on 30 December 1990 in Sheffield, South Yorkshire, England. Joe Root is a right-hand batter for England and has been the backbone of the English batting lineup for more than a decade in Tests and ODIs. He has captained England in Tests for five years and won 27 matches. Joe Root was also included in England’s all-time Test XI by the ECB. The root is considered as one of the four best players of the Test cricket of the decade including Virat Kohli, Kane Williamson, and Steve Smith popularly known as Fabulous 4. The root is the second-highest scorer for England in Tests as well as in ODIs. Root has the highest number of centuries in ODIs for English side. Under the captaincy of Joe Root England defeated many teams & won 27 Tests out of 60.

Joe Root started playing cricket at a very early age of 6 years. Root attended King Ecgbert School in his hometown Sheffield and played many matches for them. At the age of 15 years, Joe Root got cricket scholarship and attended Worksop College. During his College life, Root joined Sheffield Collegiate CC and developed his cricketing skills. At the age of 16 years, Root participated in Bunbury Festival Tournament and won Player of the tournament award.

At the age of 17 years, Joe Root made his domestic career debut for Yorkshire in 2007. Joe Root scored 57 runs on his debut in domestic circuit. He

represented Yorkshire in many tournaments and won many matches single handedly.

In 2009, Joe Root was picked up in the Under-19 squad of England for ICC Under-19 Cricket World Cup. Root played some classical knocks in the tournament for his side.

In 2011, Joe Root made his County debut for Yorkshire while playing against Worcestershire. Few months later, he scored his maiden county century against Sussex.

In 2014, Joe Root was appointed as captain of Yorkshire and he led his team to the County Championship title victory in the season.

In December 2012, Joe Root made his international debut in a Test match against India. Root scored 73 runs in the first innings of the test match and helped England in winning the test.

Few days later, Joe Root made his T20I debut on the same tour against India. However, he didn’t get a chance to bat in the match. Root also made his ODI debut on the tour of India. He played all 5 ODI matches in the series and scored 163 runs including his maiden half century.

In 2013, Joe Root scored his maiden Test Century against New Zealand. In a 3-match series, Root ended up as the highest scorer with 243 runs in his name.

Joe Root was picked up in the England squad for ICC Champions Trophy in 2013 where he helped his team in their journey to finals. Root scored 68, 38, 40, 48 runs in 4 matches during the tournament.

During the 2013 Ashes, Root played as an opener and smashed 180 runs in the first innings of second match and also picked 2 wickets in the match. He ended up the series as the highest run getter for English side.

During the 2014 Ashes, Root struggled to score big runs like his other team mates as England lost the series by 5-0. Joe Root only managed to score 192 runs in 4 tests.

By 2014 end, Joe Root became crucial member of England squad and played almost all the matches for the team.

During the 2015 ICC Cricket World Cup, Joe Root smashed a century and ended the tournament as the leading run getter for his team.

In 2015 Ashes, Joe root scored 3 centuries and became the youngest English batter to achieve the record. Root ended up as the highest run getter scoring 460 runs in 5 matches.

In the ICC Men’s T20 World Cup in 2016, Joe Root led his team from the from the front and ensured their Journey to the finals. Even in the final against West Indies, Root scored 57 runs. However, England lost the final. Joe Root ended the tournament with 248 runs in 7 matches.

Joe Root made a remarkable comeback in the ICC Cricket World Cup 2019, Root smashed 556 runs in 11 innings during the World Cup and helped his team to win first ever World Cup title.

In December 2019, Joe Root scored his maiden double century as the captain against New Zealand.

During a test series against India in 2021, Joe Root took his first five-wicket haul in tests. In the same series, Root retained his top ranking in Tests.

In February 2017, Joe Root was appointed as the captain of Test team of England. On his captaincy debut in a test against South Africa, Joe Root scored

190 runs and made the record of highest runs on Captaincy debut. During the Ashes, Joe Root’s captaincy also came into controversy when few former English players criticized his defensive approach.

Joe Root remained captain of England for 5 years and helped his team in many historic wins. On 15th April 2022, Joe Root resigned from the captaincy.

In Tests, Joe Root has played 117 matches and scored 9889 runs including 25 centuries and 53 half centuries. He has taken 45 wickets in the tests.

In ODIs, Joe Root has played 152 matches and scored 6109 runs including 16 centuries and 35 half centuries. He has taken 26 wickets in the ODIs.

In T20Is, Joe Root has played 31 matches and scored 893 runs including 5 half centuries. He has taken 6 wickets in the T20Is.

In Tests, Joe Root has played 117 matches and scored 9889 runs including 25 centuries and 53 half centuries. He has taken 45 wickets in the tests.

On 15th April 2022, Joe Root resigned from the captaincy of Test team.