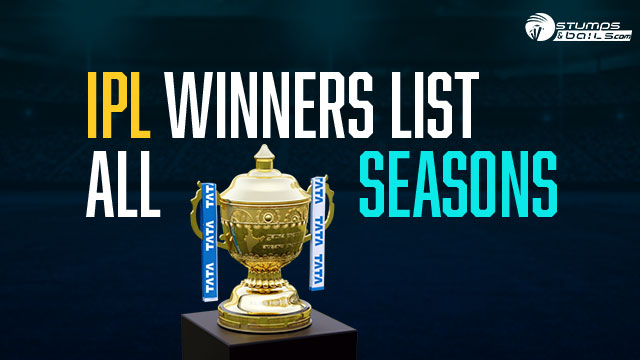 The biggest carnival of cricket – Indian Premier League is all set to begin from March 26, 2022. This will be the 15th edition of the league that started from 2008. Since its inaugural season, this tournament has been a perfect platform for producing budding talents. So far, there have been 14 IPL seasons, where Mumbai Indians has proven to be most successful team with 5 titles. In this article, we have put together a complete IPL Winners List All Seasons

The inaugural season of IPL brought an unimaginable vigor in the game. With the power hitters in all the teams, IPL didn’t take much time to make its place in the heart of Cricket fans all over the world. Nonetheless, Rajasthan Royals emerged as the champions of the league.

Yusuf Pathan was declared man of the match for picking up 3 wickets and a handy half century.

A team who was at the bottom of points table in the first season, somehow managed their place in the playoffs in 2nd season. The team rode on the backs of a few emerging Indian players such as Rohit Sharma and legends like Adam Gilchrist, the skipper, and Andrew Symonds.

Anil Kumble was named man of the match for his magical spell. He took 4 wickets in the match.

Making a comeback has always been a story for MS Dhoni. In the 3rd edition of IPL, his team made a comeback after losing 5 matches. Under the captaincy of MSD and power hitters like Suresh Raina, Albie Morkel Chennai clinched their first ever IPL trophy

Suresh Raina was awarded the MOM for his knock of unbeaten 57 and 1 wicket.

Chennai won their 2nd consecutive title in the 4th edition of IPL. This year IPL governing body introduced 2 new teams that made the league more competitive. However, under the leadership of MS Dhoni, CSK cliched the trophy.

Murali Vijay was awarded the man of the match for his knock of 95.

By this time, competition had become fiercer. This season Shahrukh Khan’s franchise KKR lifted the trophy for the first time ever. In the finals, Kolkata faced heavyweights CSK who had already won 2 titles and were looking for their third.

Manvinder Bisla of KKR was declared the MOM in final for his knock of 89 runs.

Under the leadership of newly appointed captain, Mumbai Indians regained its lost vision of winning. They had a quite smooth journey to the finals where they faced Chennai.

Kieron Pollard’s unbeaten innings of 60 runs from 32 balls earned him the man of the match award.

KKR launched an onslaught on the defending champs Mumbai Indians in the very first match, held in UAE. KKR finished 2nd in the league stage and faced Punjab in the finals.

Manish Pandey was declared the man of the match in the Final.

The eighth edition of IPL has to be one of the most competitive tournaments in the T20 format to date. Not a single team could get over 18 points on the table. Mumbai somehow managed their place in finals with Chennai.

MI Rohit Sharma was awarded man of the match for his innings of 50 runs.

After the Deccan Chargers left a vacuum in the tournament space after 2012,  Sunrisers Hyderabad took its place. One man army David Warner, a three-time orange cap winner, held up the batting flank for the team in the whole season.

Ben Cutting of SRH was declared the man of the match in the Final.

the former two-time IPL winners got back in action for the tenth edition. Under the new mentorship of Mahela Jayawardene as Head Coach, the Rohit Sharma-led side looked stable and ready to conquer the league. From the very beginning MI looked fine and made their place in finals comfortably.

Mumbai’s Krunal Pandya was awarded man of the match award for his innings of 47.

CSK kicked off their campaign with an exciting win over Mumbai Indians. Dhoni led team positioned itself at 2nd position in points table in the league stage.

Shane Watson of CSK won the player of the match award for his innings of 117 not out off 57 balls.

With almost the same team as previous edition, Mi were favorites from the beginning. At the end of the league round Mumbai was at the top of the table and faced Chennai in another final.

Jasprit Bumrah was awarded the player of the match for his spell of two for 14 in his four overs.

A year that turned the lives for everyone. This year IPL was conducted in September instead of April. Mumbai got a setback during the season when Rohit sharma got injured. Under the Captaincy of Pollard MI had a tricky road to the finals.

Trent Boult was named the Player of the Match for his decisive spell of three wickets for 30 runs.

14th edition of the tournament that was played in two parts due to Covid- 19 in the country. Chennai began their journey as one of the favorites as many thought that this might be the last season of MSD. And, “Thala” did it again, he led his team to another victory.

Faf Du Plessis won Man of the Match award for his knock of 86 runs in the finals.