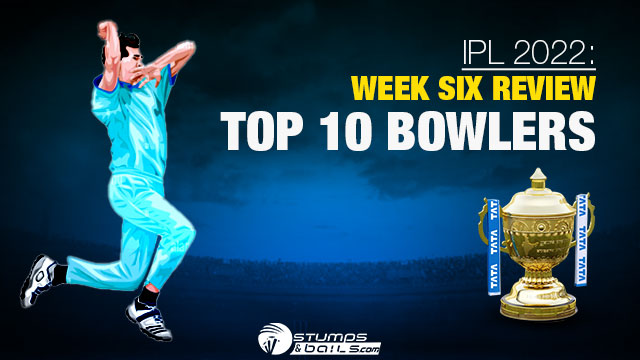 The fact that pitches in IPL 2022 will slow down was not lost on anyone. Pitches have started to show signs of wear and tear. The ball has started to stop on the batsmen. Two-paced surfaces are now the norm rather than being the exception. Bowlers have started exploring the angles and ground dimensions better. It is expected that they will continue to call the shots heading into the business end of the tournament.

We Look At The Top 10 Bowlers At The End Of Week Six:

He is also someone who didn’t particularly have a great week. He added one more wicket to his name this week. Mohammad Shami has picked 15 wickets so far at an average of 24.33. His strike rate of 17.60 is decent while his economy rate of 8.29 is a bit on the higher side.

He has also dropped three spots to rank number eighth on this list. The KKR pacer has 15 wickets to his name in 10 games so far. Umesh Yadav has been KKR’s lone pace warrior. He averages 19.06 conceding runs at just 7.15 per over. His strike rate of 16 is pretty decent too.

He has played a couple of games less than most bowlers on this list. Dwayne Bravo though continues to impress. He has picked 16 wickets so far in 9 games at an average of 17.68. Bravo’s economy rate of 8.75 is a bit on the higher side. But his strike rate of 12.12 stands out.

He is one of the most improved bowlers this season. Khaleel Ahmed has picked 16 wickets so far. He averages 15.50 with the ball. Ahmed’s economy rate of 7.75 is impressive. He strikes at every 12 balls. Ahmed is having some season this year.

SRH pacer, T. Natarajan couldn’t add much to his numbers this week as he was nursing an injury. He remains stationary at 17 wickets in 9 games at an average of 17.82. His economy rate of 8.65 is on the higher side. But his strike rate of 12.35 is excellent.

He has revived his limited-overs career this season. Kuldeep Yadav has been sensational for Delhi Capitals. Yadav has picked 18 wickets in 11 games at an average of 19.55. His economy rate of 8.87 is on the higher side but his strike rate of 13.22 is pretty good.

The Punjab seamer has made quite the jump on this list. He has moved 6 spots upwards. Kagiso Rabada has picked 18 wickets in 10 games so far. He averages 17.94 while he strikes at 12.33. His economy rate of 8.72 is a dampener though.

He was ranked fourth on the list last week. His five-wicket haul against SRH has helped him move ahead on this list. Wanindu Hasaranga has picked up 21 wickets in 12 games at an average of 15.33. His economy rate of 7.85 has improved considerably. But it is his strike rate (11.71) that stands out. It is the best among the top-ten wicket-takers this season.

For the fifth week running, it is Yuzvendra Chahal who holds the bowling aces. Yuzvendra Chahal has now picked 22 wickets from 11 games this season. He averages 14.50 (best on this list). His economy rate stands at 7.25. Chahal’s strike rate of 12 is brilliant!