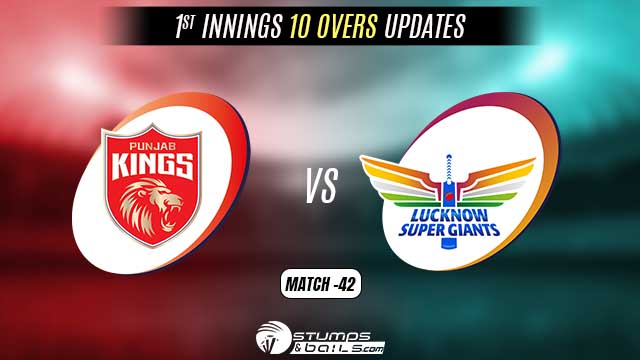 The contest between Lucknow Super Giants and Punjab Kings is on and it is the Kings who have won the toss and elected to bowl first. Lucknow, trying to build a good total have now reached 67 for 1 at the end of 10 overs of the 42nd match of IPL 2022. In the last 5 overs, managed to score 35 runs losing no wickets.

After losing captain Rahul early on, we saw a partnership building up between Quinton de Kock and Deepak Hooda. During the first six overs, the duo may not have hit many boundaries but they ensured that they stay in the middle and do not give away their wicket easily. The team scored 39 runs in the powerplay overs.

Rishi Dhawan bowled the 6th over of the innings and kept things tight, conceding just 7 runs from the over. He continued his spell in the 8th over and lost the momentum to some extent as he got hit for 10 runs. Hooda hit a six on the first ball of the over but Rishi managed a nice recovery.

The Punjab bowlers were successful in restricting Lucknow batters and it looks like they will continue with this as the match progress. If LSG doesn’t pick up the pace from here on, they will be in trouble and their low score might not work against Punjab which is well equipped with big hitters. They need to be extra careful with their shot and not let run rate pressure make them hit untimely shots.