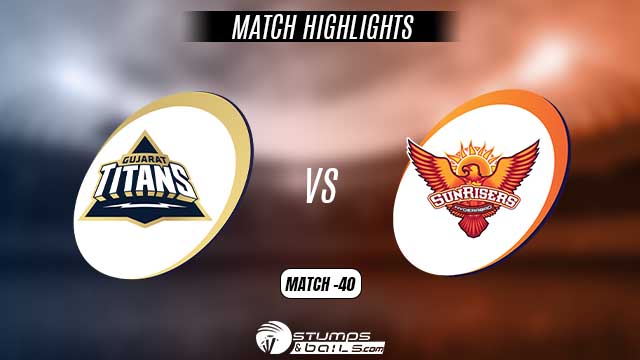 In the 40th match of the Indian Premier League (IPL) 2022, Gujarat Titans thrashed Sunrisers Hyderabad by 5 wickets at the Wankhede Stadium, Mumbai. Both teams are given their best in order to hold the top spot in the points table. The dramatic duel has been disclosed after many twists and turns. The final over transformed the course of the game, allowing the Gujarat Titans to take the lead in the standings.

Despite winning the toss, Gujarat Titans opted to bowl first, while Sunrisers Hyderabad got off to a tough start, losing their skipper-opening batsman, Kane Williamson, for only three runs to Mohammed Shami. The next batter, Rahul Tripathi, tried to build a crucial first-wicket partnership but was dismissed by Shami at 16 (10), leaving SRH to lose their 2nd wicket before the power play.

However, the other opening batsman, Abhishek Sharma, and Aiden Markram teamed for a significant wicket-to-wicket stand for SRH. The pair hammered the ball hard all around the park, making the GT bowlers sweat. The duo put up a 96-run partnership, which is also the best of the innings, well before Alzarri Joseph removed Abhishek Sharma for 65 (42).

Furthermore, SRH keeper-batter Nicholas Pooran was removed for 3 runs by Shami, while Washington Sundar was dismissed in the shape of a runout after scoring 3 runs. Yash Dayal, the rookie, removed the experienced and well-settled batsman Markram for 56 (40) to restrict the SRH scoreboard ticking.

Meanwhile, the youngster Shashank Singh slammed a power-hitting knock with back-to-back 4 sixers in the final over of the innings bowled by Lockie Ferguson to score 25 runs in the over, who played the finisher’s role. Despite losing six wickets, Shashank Singh 25* (6) and Marco Jansen 8* (5) impressed in the last over of the innings to set GT a challenging target of 196.

Shami, with a three-wicket haul, Yash Dayal, and Alzarri Joseph, each with one wicket, have shown to be consistent components of the GT bowling department.

To chase the SRH’s lofty target, Gujarat made a great start to the innings, with openers Wriddhiman Saha and Shubman Gill putting on a 69-run partnership for the first wicket. Kane Williamson, on the other hand, revised his tactics to bring Umran Malik in to break the crucial partnership when he dismissed Shubman Gill 22 (24) to boost SRH’s confidence.

‘PLAYER OF THE MATCH’ awarded to Umran Malik

Hardik Pandya, the GT skipper, failed to resume the momentum from his earlier performance – fell short for Umran Malik after scoring only 10 (6) runs. Saha, on the other hand, continued his brilliant knock to chase the target, but Umran Malik came into the attack to dismiss the well-established batter at 68(38). In the 14th over of the innings, Malik also clocked a speed of 153 kmph.

The very next batters for Titans, David Miller, and Rahul Tewatia remained firm for the team, seeking a match-winning knock in the death overs. But the day favored only the SRH speedster, Umran Malik, upon dismissing David Miller (17) and Abhinav Manohar for a golden duck in his four overs quota, Malik claimed a five-wicket haul.

GT lost 5 wickets as the equation drew closer, reaching 144 in 16 overs. Rahul Tewatia and Rashid Khan appeared to be crucial for the team to strengthen the prospects for GT winning the match. The duo put on a brilliant 59-run partnership in the death overs, placing the SRH bowlers in distress.

Marco Jansen lost complete momentum by surrendering 25 runs in the final over of the innings. Jansen is also the only bowler who has been proven to be a much expensive bowler, conceding 63 runs in his four overs quota with an economy of 15.80. Finally, after many twists and turns, Tewatia (40* off 21) and Rashid Khan (31* runs off 11) made the equation easy and sealed the match result.

We witnessed an absolute thriller at the Wankhede and it’s the @gujarat_titans who edged out #SRH to seal a last-ball win! 🙌 🙌