KKR star Andre Russell is consuming alcohol while he is away from the pitch. 32-year-old Russell recently uploaded an Instagram story with a bottle of alcohol with the caption “It’s ok to not be ‘ok.’’ Looks like Russell was trying to convey a message indirectly to his fans. He is looking upset in the photo with a big bottle of rum in his hand. He also wrote “alcohol helps all the time” on the photo. 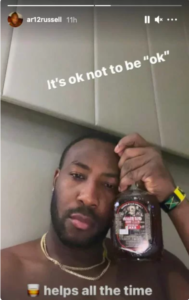 The latest season of the Indian Premier League has not been great for Russell so far. Except for a couple of innings here and there, the West Indian has not been his true self like he was in the 2019 season. Russell has managed to score 118 runs in 6 games with 7 wickets so far in the season.

Adding to that, the strict bio-bubble rules implied by the BCCI can get really tough on the players. Every player is under a strict bubble and will have to maintain it till the end of the season. Many players have also left for their respective countries due to the over stressful situation being created in the bio-bubbles. This might be a sign for the fans from Russell that things are getting hard for him in IPL 14.

He scored an unbeaten 80 off 40 on the way to victory in our 100th IPL game! 💜#MuscleRussell #KKRHaiTaiyaar #IPL2021 pic.twitter.com/wqG7ctptZS

KKR are currently in the 5th spot of the points table with just 2 wins in 6 games. The Eoin Morgan side has lacked in their batting as well in their bowling so fall. They have managed to get better at SRH and PBKS so far. They will next face DC on Thursday, April 29.