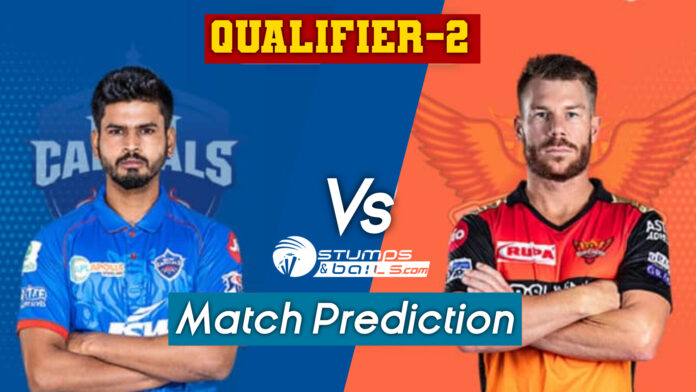 The Delhi Capitals take on the Sunrisers Hyderabad at the Sheikh Zayed Stadium on Sunday in Qualifier 2 of the Indian Premier League ( IPL) 2020. The match would be telecasted live from 7:30pm onwards.

Under Shreyas Iyer, DC has managed to make the playoffs this year too, which is quite significant for a team that hitherto was unknown for its consistency. They won everyone’s hearts in the earlier stages of the league with their fearless play, the fans, and the management would want more of the same from them come the playoffs.

DC would be hoping the injury to their star spinner Ravichandran Ashwin isn’t too serious.

SRH may just might be tempted to play Jonny Bairstow in place of Kane Williamson, who might prove to be an enforcer in the middle order as compared to Williamson’s role of an accumulator.

If the pitch is similar to one they played against RCB, couple of days ago, they might well go ahead with Shahbaz Nadeem, else they would want to pick Khaleel Ahmed, who provides them a wicket taking option.

The pitch at Sheikh Zayed Stadium is, as seen in the Eliminator, slightly on the slower side. Although with the new ball there is some swing on offer, the spinners have proven to be deadly on this surface with the square limits helping their cause.

The weather is expected to be slightly cloudy tomorrow. The visibility would be about 10 km, i.e. 6 miles, and 1016 mb of atmospheric pressure. The temperature during the day is going to hit 32 ° c and at night the temperature is going to drop to 26 ° c. Without precipitation and cloud covering 28 percent of the atmosphere, it will be dry, the humidity will be around 47 percent.

One of the most crucial cogs in the DC lineup is their captain Shreyas Iyer. His form has tapered a bit heading into the business end of the tournament but we expect him to make amends by delivering an impact performance in the playoffs.

In a crucial game like, we expect SRH’s talismanic skipper to come to the fore and put on a show for his team. If David Warner keeps going, it would be difficult to stop him and SRH.

Sunrisers Hyderabad are predicted to win the match.