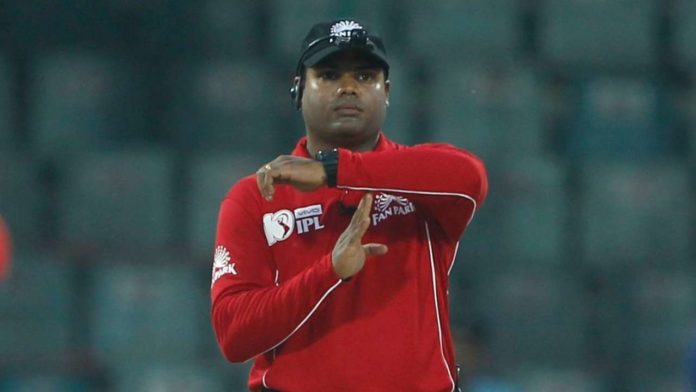 Nitin Menon is only the third from India to achieve it:

Nitin Menon, a young Indian umpire became the youngest umpire, who is able to include in the Elite Panel of Umpires of the International Cricket Council for the upcoming season 2020-21 by replacing Nigel Llong of England.

After former skipper Srinivas Venkatraghavan and Sundaram Ravi, who took retirement last year, Nitin Menon is the third umpire from India to be able to induct in the high-status group. He is just 36 years old and appeared in three Test matches, 24 ODIs and 16 numbers of T20Is.

In an ICC statement, Nitin Menon quoted “For me, officiating with the top umpires of the whole world is something which I always dreamt of and what I am feeling now is indescribable”. At the age of 22-23, he quit his career as a cricket player and had become a senior umpire and started umpiring in BCCI accredited games.

The prerequisite in the Elite Panel of ICC makes Nitin Menon well qualified to officiate in Ashes next year in Australia if ICC  cancels the local umpires for the home series policy which has been permitted because of the COVID-19 pandemic.

But the elevation of Nitin Menon makes him a perfect candidate to do officiating for all five matches that will be held between India and England next year.

Nitin Menon is a son of the former international umpire, Narendra Menon. Nitin had a very short career as a player. He played only two List A matches for Madhya Pradesh.

About his journey, Menon said “My father is a former international umpire and in the year 2006, BCCI organized an exam for umpires and that was held after a break of nearly 10 years. So, my father suggested me to give that exam and said that if you are clear, you can choose to umpire as a profession. So, I have written the exam and in the year 2006, I became an umpire.”