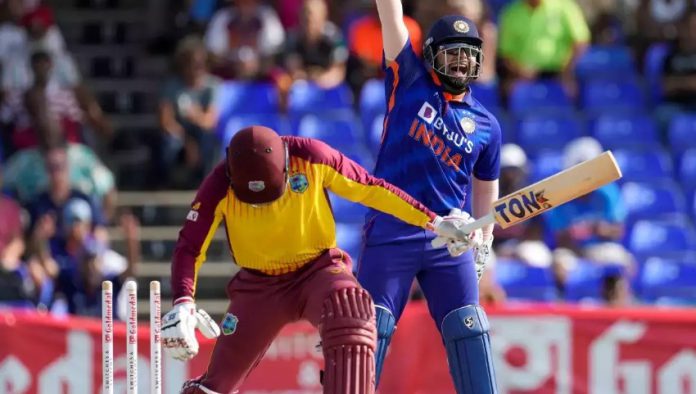 The Cricket West Indies confirmed that the start of third T20I between India and the Windies has been pushed back by 1.5 hours to provide rest to both team following the second match of the series on Monday was delayed twice due to luggage issues.

The third T20I which slated to begin at 8PM will now be start at 9:30 at the same venue (Warner Park, Basseterre). The board issued an official statement on the development.

The second T20I was originally scheduled for an 8pm start; however, it was initially delayed by two hours due to luggage issues, and was further delayed by another hour due to similar concerns. The match eventually began at 11pm IST, with Windies registering a five-wicket win.

“Cricket West Indies (CWI) confirmed a revised start time of 12pm (11am Jamaica/9:30pm India) for the third match between West Indies and India in the Goldmedal T20I Cup, to be played at Warner Park in St Kitts on Tuesday 2nd August,” CWI stated in an official statement.

The 5-match T20 series is on 1-1 level after India faced a defeat in the second match by 5 wickets. The star of the second match was West Indies left-arm pacer Obed McCoy, who took 6 wickets in the game to restrict India for just 138 in 20 overs, which his team later chased down with ease.

Notably, the first game was won by team India on Friday by 68 runs.

Third match on Tuesday will decide who will gain a much-needed lead to keep up the confidence for the series, as part of the preparation for the upcoming T20 world cup.