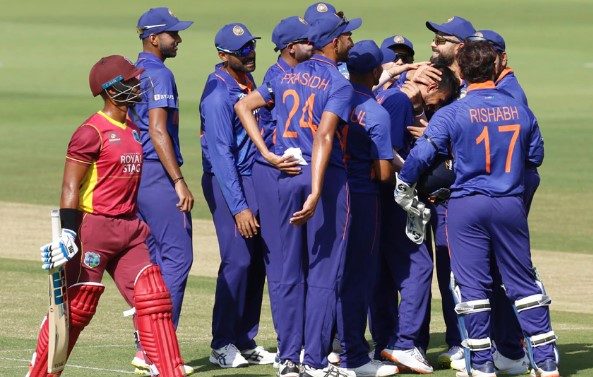 India and West Indies are all set to face each other in the series opener at the Queen’s Park Oval, Port of Spain, Trinidad on Friday.

Team India is highly charged after defeating England in England and will look to carry forward the same momentum in West Indies. However, there have been some changes in the squad as some of the star players were given rest for the ODI series against West Indies. But, still, the Indian side is strong on paper.

West Indies, on the other side, is right now on the back foot as even after playing at their home they lost the ODI series against West Indies some days ago.

Let’s dive into the IND Vs WI Dream11 Prediction, Dream 11 Team Today, and match detail to learn more details below.

The game between India and West Indies will be telecasted on DD sports. While the live streaming of the game will be available on the Fan Code app.

The Queen’s Park Oval pitch is a good surface to bat on especially when openers provide a good start. Although it is equally beneficial for the bowlers as well. So it will be an interesting contest for sure. Till now, India has played 21 matches here and won 11 of them, lost 9, while 1 ended in no result. In overall 64 games, teams batted second and won 34 games while sides batted first to secure 30 wins. The skipper who wins the toss would like to choose the bowl first.

After seeing back the popular opening combination of Rohit Sharma and Shikhar Dhawan for a long time. Team India will again witness a new opening combination as Shikhar Dhawan is there but no Rohit Sharma. Most likely Ishan Kishan will open the innings for India alongside skipper Dhawan. During the first ten overs, India could post 65-70 runs. While the hosts can put 55-60 runs on board.

Although, India will miss the services of their star players like Rishabh Pant and Hardik Pandya in the series. Still, they have a bunch of players who can score as quickly as possible during the final ten overs. With Shreyas Iyer, Ravindra Jadeja and Axar Patel in the team, the men in blue can put 70-75 runs on board in the final 10 overs. Whereas West Indies might collect 65-70 during the last ten overs.

As per the overall scores of both teams are concerned, one can say that India might score somewhere in the range of 330-340 runs, whereas West Indies could post 270-280 runs.

Who will win Today’s match between IND Vs WI?

Team India will play the complete ODI series without their regular captain Rohit Sharma, regular wicket-keeper Rishabh Pant, dependable all-rounder Hardik Pandya, and the leader of the fast bowling department Jasprit Bumrah, while the veteran Virat Kohli also will not be there with the squad part of workload management. But after defeating England in England, India reached West Indies with full confidence to win the series under Shikhar Dhawan.

West Indies, who were playing some good games for the past couple of months, lost track during the recently completed ODI series against Bangladesh to face a dreary whitewash. However, they will look to bounce back but even after playing without their regular player’s team India still looking strong on the table.

Although, as per both sides’ recent performances and strengths. Team India might win the series opener against West Indies on Friday.

From India, the players to watch for in the 1st ODI match would be Shikhar Dhawan, Suryakumar Yadav, and Shreyas Iyer as batters. Ravindra Jadeja is as an all-rounder, while Yuzvendra Chahal and Mohammed Siraj will lead the bowling department.

From the West Indies side Shai Hope and Shamarh Brooks as batters. Nicholas Pooran as wicket-keeper, Jason Holder as an all-rounder, and Alzarri as bowler will be the best players to watch out for in the first ODI between India and West Indies.