India will host New Zealand for their three-match T20I series which is set to begin on 17th December. The first of the three T20Is will be played at the Sawai Mansingh Indoor Stadium in Jaipur, Rajasthan. New Zealand are freshly coming on the back of a heartbreaking loss in the finals of the ICC T20I World Cup against Australia. For India, it was a disappointing campaign as the “Men in Blue” couldn’t even make it to the knock-out stages of the tournament. Let’s have a look at the IND vs NZ Dream11 preditions.

Team India are going through a complete rejuvenation process under their newly assigned T20i skipper Rohit Sharma. The Indian fans will be excited to watch the complete makeover under the management of legendary Indian cricketer Rahul Dravid, who has replaced Ravi Shastri as India’s new head coach. Virat Kohli has been rested for the T20I series and will join the Indian team only in their 2nd Test against New Zealand on December 2nd. 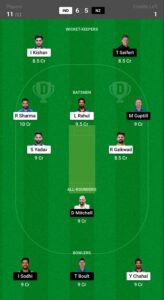