Hobart Hurricanes will be up against the Sydney Thunders in the upcoming clash of the Big Bash League. HUR vs THU is scheduled to be played at the Perth Stadium on Thursday, January 6th at 12:40 PM IST. Here are HUR vs THU Dream11 predictions, preview, team, squad and predicted XI.

The Hobart Hurricanes are currently on the 3rd spot of the BBL points table with 18 points to their name. They have managed to win 5 games in the season so far with three losses to their name. They are currently experiencing a decent form in the season with three wins in their last five games. The Hurricanes will be motivated to grab the win to strenghthen their chaces of qualifying for the knock-out stages.

As for Sydney Thunders, they are currently on the 2nd spot of the points table with 19 points in the season. Out of the 7 games they have featured in the season, the Thunders have managed to win five of them and have faced defeat in the remaining two matches. The Thunders have managed to win four out of their last five games. Their only defeat out of the previous five came in their last BBL outing. 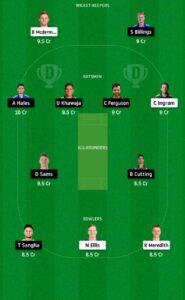 Our HUR vs THU Dream11 prediction is that Hobart Hurricanes will win the match.