The most accepted and experts opinion is that the origin of the cricket is first developed in early medieval times to the south-east of London. The first reference to cricket being played as an adult sport was recorded in 1611, and in the same year dictionary defined cricket as a boys’ game

Cricket was probably devised by children and survived for many generations as essentially a children’s game. Possibly it was derived from bowls, assuming bowls is the older sport, by the intervention of a batsman trying to stop the ball reaching its target by hitting it away. This game used to be played on sheep-grazed land.

The game was termed as “Village cricket” as it was mostly played in rural villages of England and Wales. Many villages used to have their own teams way back in the 17th century. 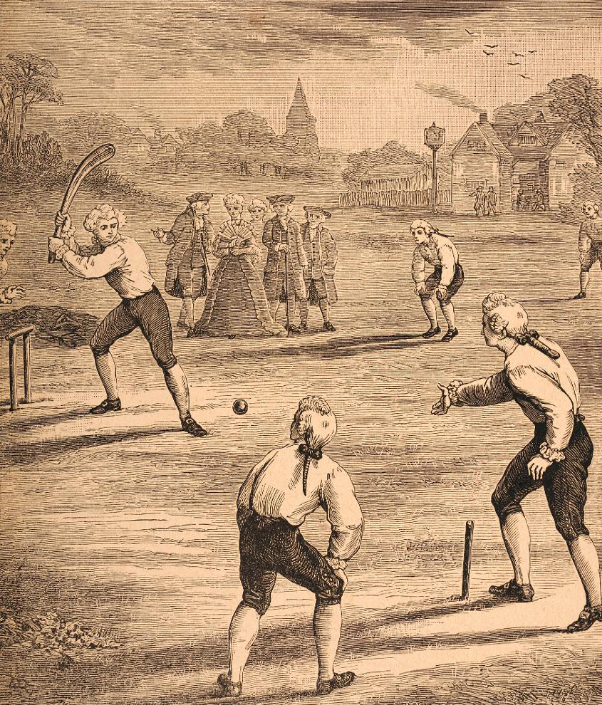 In the early stages of 18th-century cricket has become a leading sport in south-eastern countries of England, later it slowly spread across the England and Women cricket got introduced in1745, the first known match was played in Surrey.

Early cricketers used to play in their everyday clothes and had no protective equipment such as gloves or pads. A 1743 painting of the game which was played at Artillery Ground depicts two batsmen and a bowler dressed alike in a white shirt, breeches, white knee-length stockings and shoes with buckles. In 1744 the first rules of the cricket were introduced like, The pitch has to be 22 yards long, 3 wickets added with dimensions of 22 inches high and six inches wide(Before that game used to have only two wickets and one bail), and lbw. Cricket entered into North America in the 17th century via the colonies and in the 18th century, it spread all over the world like west indies and India.  It arrived in Australia almost as soon as colonization began in 1788 and the sport reached New Zealand and South Africa in the early years of the 19th century.

Cricket was also included as an Olympic sport at the 1900 Paris Games. Test cricket continued to expand during the 20th century when the Imperial Cricket Conference (as ICC was originally called) was found in1909,only England, Australia and South Africa were  its members and then introduced other countries like West Indies (1928), New Zealand (1930) and India (1932)  Pakistan (1952), Sri Lanka (1982), Zimbabwe (1992) and Bangladesh (2000). South Africa was banned from international cricket from 1970 to 1992 as part of the apartheid boycott. Cricket with limited overs was introduced in 1963 by English Counties, which is considered as a new ear for the game.

In the year 1975 ICC started Cricket World Cup which was hosted by England, since then 11 world cup championships were played, 2019 will be our 12th ICC World Cup Championship.