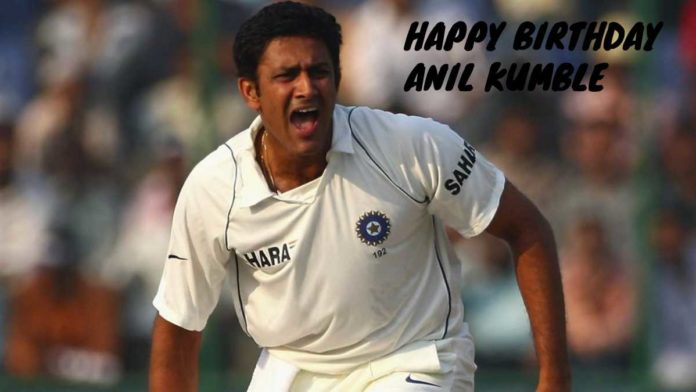 Right-arm leg-spin bowler Anil Kumble was on born 17 October 1970 in Bangalore. A mechanical engineering graduate, he completed his schooling from National High School and B.E. from Rashtreeya Vidyalaya College of Engineering (RVCE) in Bengaluru.

He pursued his cricketing interests seriously from the age of 13 when he joined a club named “Young Cricketers”. An unconventional spinner, Kumble was not a big turner of the cricket ball. He was, however, renowned for his accuracy and pace and also his ability to extract bounce from the pitch, making him one of the best Test bowlers of his time during his career of 18 years in Tests and ODIs.

He is the third-highest wicket-taker of all time, with 619 Test scalps. His fellow spinners, Muttiah Muralitharan and Shane Warne, are the top two most successful Test bowlers of all time.

In November 1989, he made his first-class debut, playing for Karnataka against Hyderabad. He played his maiden ODI against Australia at Sharjah in April 1990. Kumble’s Test debut was against England in Manchester in the second Test of India- England Test series.

The icing on the cake of his career was when he bagged all ten wickets of the opposition team during an India-Pakistan Test at Feroz Shah Kotla grounds in Delhi in 1999. The only other player in world cricket to have achieved a similar distinction was Jim Laker of England in 1956.

Kumble was also named by Wisden as one of their five Cricketers of the Year in 1996. He announced his retirement from all formats of international cricket in November 2008 after India’s third Test against Australia in New Delhi.

In IPL, he represented Royal Challengers Bangalore during 2008-10. Jumbo, as he was nicknamed, was inducted into the ICC Cricket Hall of Fame in 2015. He also served as the head coach for the Indian cricket team between June 2016 and June 2017.

Kumble currently serves as the head coach of Kings XI Punjab in IPL.

One of India’s greatest ever Match winners and a terrific role model. Sorry for depriving you of your second century @anilkumble1074 bhai. But I pray that you score a century in real life. Only 51 more to go.. come on ..come on Anil Bhai ! Happy Birthday pic.twitter.com/P7UnvoLBlU

On his special day, our Director of Cricket Operations and Head Coach @anilkumble1074 has got a lovely message for all you fans out there. 😍#SaddaPunjab #HappyBirthdayJumbo pic.twitter.com/cHnM75iNA5

Wishing you a very special birthday and a wonderful year ahead @anilkumble1074 May God shower you with blessings today and always and I am sure this special day will bring you endless joy and tons of precious memories!🤗🤗🤗 pic.twitter.com/Sun4LaLY6Q

Birthday wishes to India’s greatest match winner @anilkumble1074 ! Have learnt so much from you and you are the best leader that I have played under! Thanks for inspiring generations of cricketers. pic.twitter.com/NAM2KeFdtX