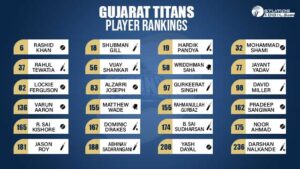 Gujarat Titans Team: Where They Stand in IPL 2022 Points Table? 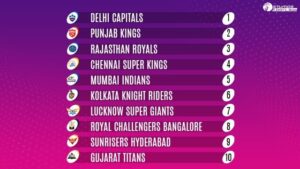 The Gujarat crowd is one of the best to play in front of and it is not a surprise now they have a home team to cheer for. The new addition to the Indian Premier League, Gujarat Titans is one of the two new permanent members of the biggest cricket league of the world. The side that will start afresh should not be worried about the pressure of expectation and rather enjoy the game of cricket. In this article, we have provided Gujarat Titans Strengths and Weaknesses.

The team invested much before the Mega Auction 2022 and selected their three stars, Gujarat Titans Captain Hardik Pandya, Shubhman Gill, and the T20 rockstar Rashid Khan. The team was later on built under the mentorship of Gary Kirsten and the coaching of Ashish Nehra and it seemed they clearly lacked experience.

Hardik Pandya, if available as an allrounder changes the outlook of the team. But if he continues to rest in the bowling department and is available only as a batter, it might not work well for GT. Hardik has never been a captain of the side before, his flamboyant personality will be tested as a leader and it will be a pleasant and entertaining sight if he flares well.

Shubhman may have dismissed his concern about the strike rate, but with the team that is not heavy on specialty batter, Gujarat Titans would require him to do better and be among the top scorers of the league. The Titans will be relieved to have the real Titan of T20s Rashid Khan who knows how to play given in any situation and will boost the team’s morale.

The concern of the team lies in their batting order. The squad lacks a consistent batter at number 3 and 4 positions. They have Matthew Wade and Killer-Miller but their performance has not been consistent and may seem unreliable for a lot of responsibility. Their investment in Rahul Tewatia should give them solid returns for the price they have paid for him.

The team’s bowling attack will be led by Mohammad Shami and be followed by Lockie Ferguson. With Rashid and Tewatia handling the spin department, GT would want their captain to take many responsibilities and be a bowler as well. Their options to fill those overs should not force them into taking more bowlers but allrounders, who can hit big and support the side with few runs here and there.

OG Rashid Khan is the best in business and will help the team perform better.

The opener and death bowling looks strong with Shami and Ferguson

Weakest Bench of all franchisees

The table in the IPL mega auction 2022 looked like they had their first outing and had no previous experience to learn from. Ashish Nehra may have done better with the bowling side-side of the squad but would have wanted to have better batters and an added bench strength which looks like the weakest amongst all franchisees this IPL. It is unsure if Gujarat will be able to win a majority of the matches given the competition but Hardik Pandya who shall be aching to make his comeback to the national squad, the heroic Rashid Khan and Rahul Tewatia who has been exceptional in previous seasons are the players to watch out for, who have potential to make the deal for their team.