Goa are currently on the 3rd spot of the Elite Group D points table with a total of two wins in the four-game they have featured in the tournament so far. In their last match against Rajasthan, they managed to defend a decent total of 155 runs as they won the game by 37 runs. The Goa side has not been consistent this season as they have failed to register two consecutive wins in the on-going season. 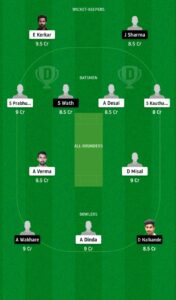 GOA vs VID Dream11 prediction: Squads to choose from

Our GOA vs VID Dream11 prediction is that Goa will win the clash.