The Goa-based team started their tournament on a low with a loss in their first match against Madhya Pradesh. Madhya Pradesh handed a huge total of 215 which the Goans failed to chase by 6 runs. Nevertheless, Goa won against Services in their second match of the tournament as they chased down a score of 161 runs with ease.

As for Saurashtra, they are currently experiencing a fine form in the season so far. They have managed to grab a win in both of their league games against Services and Vidarbha. Saurashtra will be hoping to keep their perfect record in the season intact. The upcoming clash is expected to be an interesting watch for the fans. 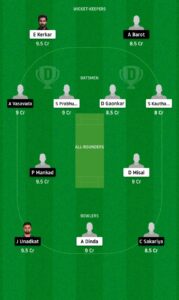 Our GOA vs SAU Dream11 prediction is that Saurashtra will win the following match.

Disclaimer: Please note that our Dream11 predictions are based on our analysis and they do no promise fixed results.