Gazi Group Chattogram will be up against Beximco Dhaka in the 4th match of the Bangladesh T20 League. The match will be played on Thursday, November 26 2020 at the Sher-e-Bangla National Stadium at 6 PM IST. Here is a look at the GGC vs BDH dream11 prediction, GGC vs BDH dream11 team, and how to watch GGC vs BDH live in India.

Shakib-al-Hassan’s Beximco Dhaka tasted defeat in their very first match of the campaign against Minister Rajshahi. Mehedi Hasan dismantled the Dhaka-side with his all-around performance during their season opener. Beximco Dhaka will be seeking redemption as they will look to add some credits in their bank with a win over Gazi Group Chattogram in the upcoming clash.

However, harvesting points out of Gazi Group’s turf won’t come easy for the Dhaka men. Gazi Group Chattogram are tipped to be the strongest side in the Bangladesh T20 club. Though the side will be playing their first match of the tournament, they look massively built on papers. Players like Soumya Sarkar, Mustafizur Rahman, and Liton Das are included in the side. 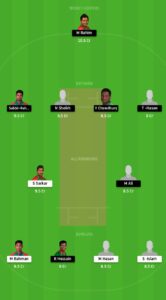 Also Read | Net Worth Of Sachin Tendulkar And Mahendra Singh Dhoni: The Numbers Are Mind-Boggling