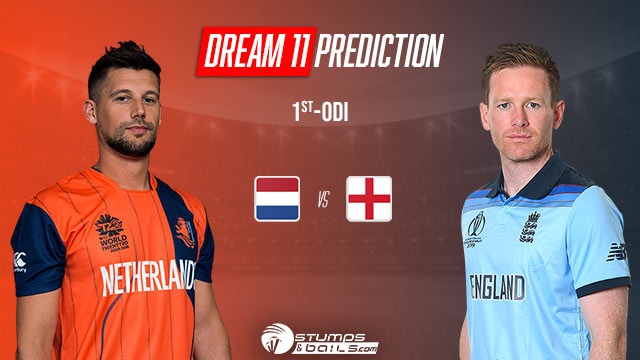 England is coming to the Orange country with their full potential ODI squad that features big names. The Netherlands is struggling to get into a winning momentum but will look forward to giving tough competition to the visitors in their home.

The game will not be live telecast on any TV channels in India.

You can track live updates on the Stumps and Bails website.

24 matches have been previously held at this venue. In the past, this has been a low-scoring venue pitch, with an average first innings score of 229. In the second innings, the score is reduced to 194. But with the current England squad that includes big hitters, we can expect to see some changes in these stats.

England is coming with their priority batters in the innings. Buttler/Roy and Phil Salt will open the innings for the team so we can expect some hard-hitting early on. Following them will be Malan who himself is a specialist in timing the ball best. The Netherlands can do some damage early on as well. We can expect a score of 60-70 in the first 10 overs from England and 40 odd runs from the Netherlands.

England has no limitations on finishers. They have a deep batting lineup where they have Moeen Ali at number 7. They can hit the ball well and hard and ensure a series of runs in the last 10 overs. The Netherlands will have to work hard to restrict the batters. To ensure good runs, in the end, the Netherlands have Teja and Tom Cooper. A score of 70 is expected from England whereas the Netherlands can score 40-50 runs if they don’t lose wickets.

England is a better batting side here and if they bat first any score above 300 is very plausible. For the Netherlands, we may see a score ranging from 240 to 260

Who will win Today’s match between ENG vs NED?

England has won 4 of the 5 matches they played last. One missed had no result. While Netherland is on a losing streak and struggling to find form. England is clear favorite to win the match.

Here are the top 3 teams we have for you:

With only a few bowlers missing, England has brought their strongest Batting side to the Netherlands. The team marks the return of Sam Curran who has been missing from the side. We are going to have many big names in action after a long time. The Netherlands have lost all the matches they have played against England. It is the first time that England will play the Netherlands on their home ground and will try to change their luck. The host country hasn’t been in very good form as they lost back-to-back series they played at home against West Indies and New Zealand. England is a clear favorite to win the match.