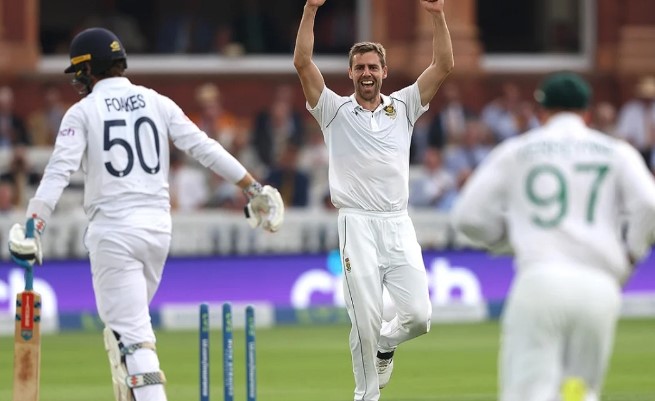 England made a solid bounce back after restricting the South Africa to 151 on the first day of second test at Emirates Old Trafford in Manchester.

Playing at home soil, England faced a defeat in the first test of the 3-match series by an innings and 12 runs, but the aggressive English side recuperated strongly and started the second test campaign with a bang to remain in series contention.

Their bowlers did a great job and bowled visitors for just 151 and later their batters scored 111 runs by the time of stumps on day 1.

Opting to bat, South African batters found it hard to stay a bit longer on crease due to bowling brilliance by both veterans of team England, James Anderson and Stuart Broad.

With that effect, the visitors lost their 3 top order batters, including skipper Dean Elgar at the score of just 41 runs.

Following the same path, the skipper of England joined the party and removed Aiden Markram and Van der Dussen in the span of just 8 to break the back of the visitors as they lost half of their side at 76.

Kagiso Rabada showed some signs of fight back by scoring the highest runs for his side (36), but with lack of support from the other end he couldn’t manage to play a long innings as a result, the Proteas bundled out for just 151.

Came on crease with a motive to laid a strong foundation for a big total, England’s top order also followed the same route as South Africa as they lost their 3 main batters at 43.

However, Zak Crawley, who managed to stay alive, did an effective 68-run partnership with Jonny Bairstow to steady their ship and was there with him when umpires announced stumps on day 1.

Both will begin the campaign from 111 for England on day 2.