ENG Vs PAK Match Prediction: The stage is set for the biggest match of the 8th edition of the ICC T20 World Cup 2022 that is the final between England and Pakistan at the Melbourne Cricket Ground in Melbourne on Sunday.

In the second semi-final, the English team beat India by ten wickets after successfully chasing down 169 runs. The team’s best performances have come from the opening duo of Jos Buttler and Alex Hales, while Adil Rashid and Chris Jordan will be important bowlers.

On the other hand, Pakistan recovered from two defeats to win three straight matches and go to the semifinals. The Babar Azam-led team then trounced New Zealand in a one-sided match. In-form bowlers Shaheen Afridi and Haris Rauf, as well as skilful hitters Muhammad Haris and Iftikhar Ahmed, will help the Men in Green fight off the Three Lions to claim their second T20 World Cup title.

ENG vs PAK Dream 11 Prediction: WHERE TO WATCH

The game between England versus Pakistan will be telecasted on Star Sports Network. Fans will be able to watch the live streaming of ENG Vs PAK match on Disney+Hotstar app.

ENG vs PAK Dream 11 Prediction: WHEN TO WATCH

The Melbourne Cricket Ground’s pitch is a surface that is conducive to batting. While spinners will be helpful in the middle overs, pacers may receive some assistance at the end of the game.

The English squad is recognized for having powerful batters in the lineup. Their openers are also in top form, and everyone saw what they did against India in the second semi-final. They added 63 runs during the powerplay overs before quickly chasing down the 169-run target. On Sunday, the entire squad and the supporters want to play in such manner, and if they do so to the best of their abilities, a powerplay with 50–55 runs would be feasible.

Despite the fact that the guys in green managed to score respectably in every game, the biggest cause for the one-time winners was the attractive opening low contribution in this tournament.

But now the opening duo Babar Azam and Muhammad Rizwan also back in form though, were anticipated to perform similarly to how they did against New Zealand in the semi-final. The management want the top-order to perform well in a crucial match and they will to add at least 45 in the first six overs.

The fact that England’s batters can hit big shots gives them an advantage in the big game along with their destructive batting lineup. In the final four overs, they want to score at least 45 to 50 runs.

The Pakistani batters at positions 5, 6, and 7 performed admirably in some of the tournament’s most important games, and they required that performance in the crucial game as well. Pakistan will attempt to score around 40 runs during the final overs, with form on their side.

Pakistan, which miraculously made it to the semifinals, played brilliantly in the knockout ga,e to advance to the final match, but their task now is difficult since they will be up against England, which most recently defeated the No. 1 team in the world, India, by 10 wickets. The English team will therefore start this game as the favourites, and the game will undoubtedly start at 55:45.

The stylish openers of England are in form of their life. Buttler played a knock of 80 not out in the semi-final game against India. While Alex Hales struck unbeaten 86 in the same game. They both are likely to dominate in the final game too.

Shadab Khan, the vice-captain of team Pakistan, who changed the game with his spectacular knock of 52 off just 22 and later bagged 2 wickets will be the player who can change the course of the game in this match too.

The speedster Shaheen Afridi is in excellent form too and hold the ability to irritate the batters with his in-swing deliveries, the left-arm bowler has claimed 10 wickets in 6 games in the tournament so far and will most likely to dominate on the night of final too.

Liam Livingstone and Adil Rashid were effective against right-handed Indian hitters. Despite the fact that Jos Buttler and Alex Hales are two of their team’s top batters, there is one more top-order batter, who poses a threat to the Pakistani bowlers is Phil Salt. While the batting order looking more dangerous with Ben Stokes in form.

Two of Pakistan’s top batters, Mohammad Rizwan and Babar Azam, had previously struggled, but have recently found their groove, which is encouraging for the other batters.

Shaheen Afridi was the team’s highest wicket-taker against New Zealand in semi-final, with two wickets in four overs.

ENG Vs PAK Head to Head

Out of 27 games played between England and Pakistan, England won 18 times, Pakistan claimed success in 9 games.

Since the teams that chose to bat first in the previous two games won both games, the toss will be important in this situation. The captain who wins the toss on Sunday will probably opt to bat first.

Suggested Playing XI No.1 for Pak vs ENG Dream11 Team: 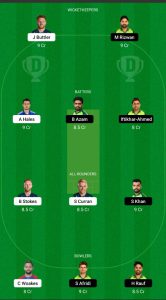 Suggested Playing XI No.2 for PAK vs ENG Dream11 Team: 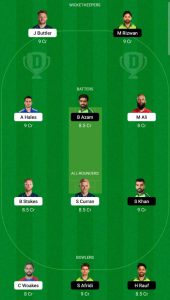