England will be keen to get on the field after a heartless effort against New Zealand in the first Test. The hosts received plenty of stick for settling for a draw instead of going for the win in the first game. The last piece of the two-match Test series between England and New Zealand will be played on Thursday, June 10, at the Edgbaston Cricket Ground in Birmingham. ENG vs NZ 2nd Test Dream11 Predictions.

If you won’t even try to chase a target of 3.6 an over at home with no WTC points at stake, when will you ever try? Not a good advert for test cricket😴 #EngvNZ@ECB_cricket pic.twitter.com/K4qzAhoe7L

Rain washed away Day 3 in the first Test. However, the match still had a plethora of entertainment to provide. New Zealand’s Devon Conway broke many records as he bagged a 347-ball 200 in his debut Test. Tim Southee dismantled the English batting line-up with a total of 6 wickets in the first innings. Rory Burns came back from the dead to score a decisive 297-ball 129 to rescue England’s cause.

Devon Conway named Player of the Match on Test debut at the @HomeOfCricket #ENGvNZ pic.twitter.com/wFn9mZM5ED

Dominic Sibley held his ground in the second innings as England played for a draw. Ollie Robinson made a strong debut for England as he clinched 7 wickets and scored 42 runs. However, Robinson was later handed a ban by the ECB for the sexist and racist Tweets he made over a decade ago. The ECB has suspended him from all the ICC events till further notice.

The second Test can be a low-key affair as the Kiwis might rest some of their big names ahead of the World Test Championship finals against India on June 18. England, on the other hand, will look to add some new names in their playing XI. 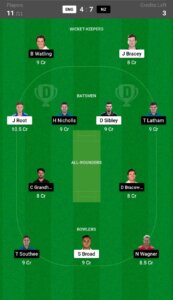 The wicket at Edgbaston will trouble the batsmen with the new ball. The pitch is expected to favour the bowlers, especially the seamers. Spinner are expected to be brought only in the second innings when the pitch will worn out.

Our ENG vs NZ 2nd Test match prediction is that the match will end in a draw.