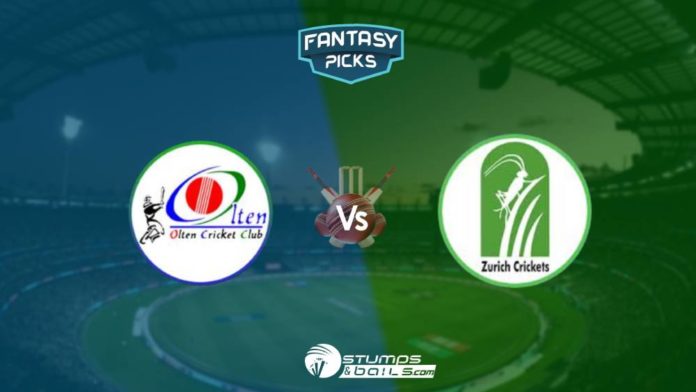 The 13th match of European Cricket Series (ECS) T10 St Gallen 2020 is scheduled to be held on 24th June 2020 in between Olten CC (OLCC) and Zurich Crickets CC (ZUCC) at the Grundenmoos in St Gallen.

Olten CC has already played there matches at this time. And they won all three matches. Now they are leading in the points table. On the contrary, Zurich Crickets CC is at the bottom of the points table as they had lost all the four matches.

In the last match, Olten CC scored the highest score 194/4 of the tournament in 10 overs on the opposition of Power CC and won the match with a huge gap pf 67 runs. Whereas, Zurich Crickets CC had lost their last match by 47 runs to Power CC. For Olten CC, this match is important to retain the winning strategy, but for Zurich Crickets CC, they will eager to start winning matches.

During the match, the weather is expected to be non-cloudy, nearly 24 degrees.

All the matches on Tuesday were high scoring games. The average score is near about 100. The first batting side has a good probability to score a big run as per the record on the track of St Gallen. So as per the record, it is fair to choose batting first after winning the toss.

Washington Sundar in Doubt for ODI Series Against Zimbabwe