ECB Blues managed to win 7 out of their 10 league games. However, they will enter the semi-finals with a loss in their last league clash against Ajman. Nevertheless, ECB Blues have been quite dominant in the tournament. Apart from Ajman, only Fujairah have managed to get the better of ECB Blues in the entire league stage. ECB bowlers have compensated for their poor batting this season. ECB will enter the semi-final with an upper hand over Sharjah.

As for Sharjah, they faced plenty of ups and downs in the whole of the league stage. They managed to win four games and faced defeat in as many. Sharjah’s one league game was abandoned and one ended in a tie. Sharjah will have to produce something special from their bag to inflict an upset over ECB Blues in the penultimate stage of the tournament. 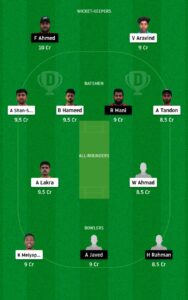 Our ECB vs SHA Dream11 prediction is that ECB Blues will win the clash.