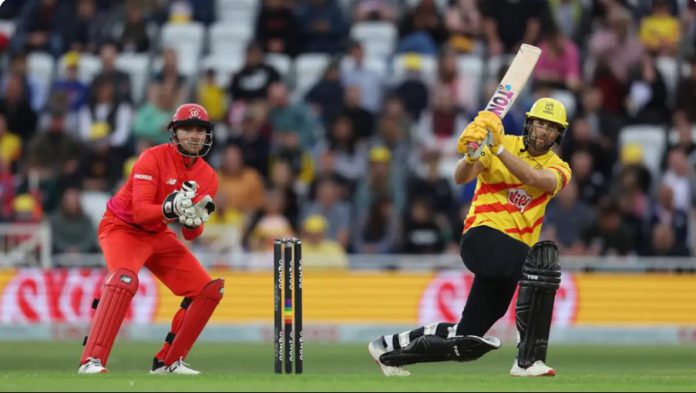 Trent Rockets have ensured a playoff spot with the 29-run win over the Welsh Fire.

After winning the toss Welsh Fire decided to bowl first and this decision to bowl first certainly did not work out as the Trent Rockets side crushed the bowling side of the Welsh Fire team.

Daniel Sams tried to do something special but as the innings progressed he was dismissed for quick 31 runs from 14 balls by J Ball, Munro also contributed with his quick cameo of 22 from 11 balls.

Welsh Fire was unable to stop the flow of runs, Trent Rockets batsman was in a different mood totally as the Rockets side put up a tough score of 172 for 4 in 100 deliveries.

In reply, the Welsh fire didn’t even look serious to chase down the target as the Trent Rockets bowlers tried all the things possible to stop the Welsh Fireside from chasing down the target.

This is the sixth time that the Welsh Fire is losing the game in the inaugural Hundred tournament, they are in a poor run of form with yet to register a single win in the competition. The target was a difficult one to chase down and it looked like Trent Rockets were clear favorites to win the match, huge thanks to Dawid Malan’s fifty that helped the Rockets side to put up a decent total.

Dawid Malan continued his brilliant run once again by scoring fifty in this match, earning him the man of the match award for helping his side to qualify for the play-offs spot comfortably.