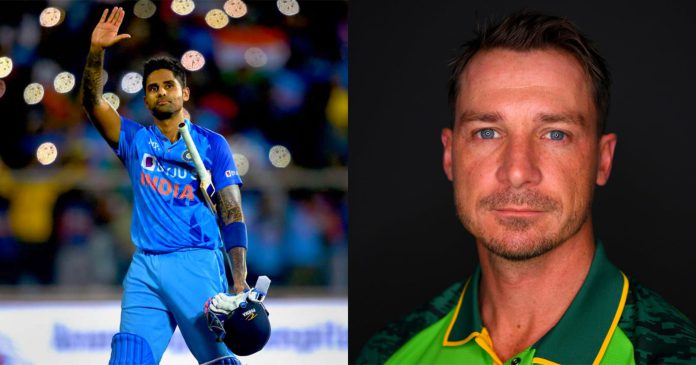 India’s version of AB de Villiers: The current heartthrob of team India, Suryakumar Yadav, who ever since his debut in 2021 entertaining the fans with his 360 degree playing skills, winning the matches for India and now becoming the highest ranked Indian batter in T20Is, the right-hand batter has cemented his place in the Indian side in no time.

Surya for some time now receiving many applauds due to his ability to play shots all over the park, and now the South African pacer Dale Steyn too joins the list of appreciating the Indian batter.

While talking about his game, the legendary pacer compares him with the South Africa legend AB de Villiers.

“He is a wonderful 360 degree player, and reminds me of AB de Villiers. He could be India’s version of AB de Villiers and with the red hot form that he’s in right now, he’s a player to definitely watch out for this World Cup,” Steyn said in an interaction with Star Sports.

In his small career in the shortest format, the star batter already smashed one century and nine half-centuries.

With India all set to start the 2022 T20 World Cup campaign as favourites, Surya will remain their key players in the tournament as the batter currently in great form and he may like the playing conditions in Australia too.

Suryakumar will do good in Australia, believes Dale Steyn

Dale Steyn also confident that Surya will shine in Australia too as the pitches there will favour his style of play.

“He is an all-round player and it (T20 World Cup) is in Australia. Where the wickets are so good, they are batter friendly. You can also get away when a bowler tries to bowl full, you can place the ball left and you can use the pace of the ball really well, given some room,” Dale Steyn added.

“He likes to get in behind the square. In places like Perth, Melbourne and all of these grounds. There is a little bit of extra pace in the pitches. So you can use the pace and hit it to fine leg, behind and all along the carpet. Besides, he’s really good when standing still and playing off the back foot. He has played some amazing backfoot cover drives and some gorgeous cover drives off the front foot too.”

India will start their T20 World Cup campaign against Pakistan at the Melbourne Cricket Ground on October 23.