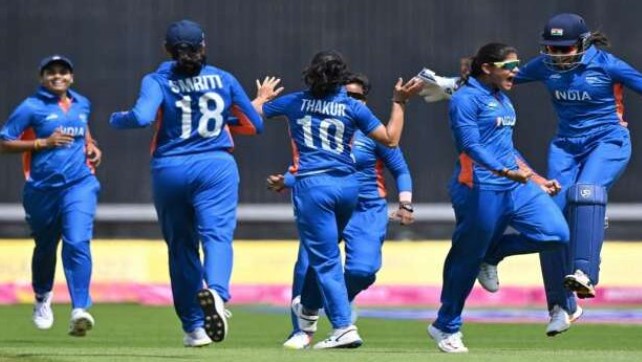 India defeated Barbados in their 3rd and final group match by 100 runs to qualify for the semifinals of the women’s T20 cricket at the Commonwealth Games.

While batting first, team India recorded a strong 162 for 4 with the help of Jemimah Rodrigues unbeaten half century knock and a 26-ball 43 from opener Shafali Verma. Later on, Indian bowlers showed their class and restricted Barbados to 62 for 8 in 20 overs with Renuka was emerged star of Indian bowling lineup after taking 4 wickets in her impressive spell.

With the win, India finished second behind Australia (6 points from 3 matches) in Group A with four points from two wins. They had beaten Pakistan and lost to Australia in their earlier matches.

After starting the campaign against Barbados, India faced a dreary start as they lost Smriti Mandhana very early, but the destructive batter Shafali Verma and Jemimah Rodrigues steadied the Indian ship by adding 71 for the second wicket.

Shafali, however, missed her chance to score a half-century as she walked back to pavilion after scoring 43 off 26 with the help of seven fours and one six. While Rodrigues remained calm on crease and continued to score runs from one end.

Harmanpreet Kaur, got out without scoring while the wicketkeeper batter Taniya Bhatia also didn’t stay long at the crease and got out after scoring six.

It was the partnership between Rodrigues and Deepti Sharma that helped the team to reach 162 in 20 overs with both remained not out. Rodrigues, who came at no.3 scored unbeaten 56 while Deepti played a knock of 34 off 28 to remain in limelight in the game.

After a modest show by batters, it was the bowlers then who slayed the whole show, with Renuka Singh leading the Indian pace department broke the back of Barbados and eliminated first 3 batters early. She ended her spell with magnificent figures of 4-10-4.

Apart from her, Sneh Rana, Meghna Singh, Radha Yadav and the skipper Harmanpreet Kaur bagged a wicket each as they restrict the Barbados side to just 62 to claim a huge victory against Barbados.