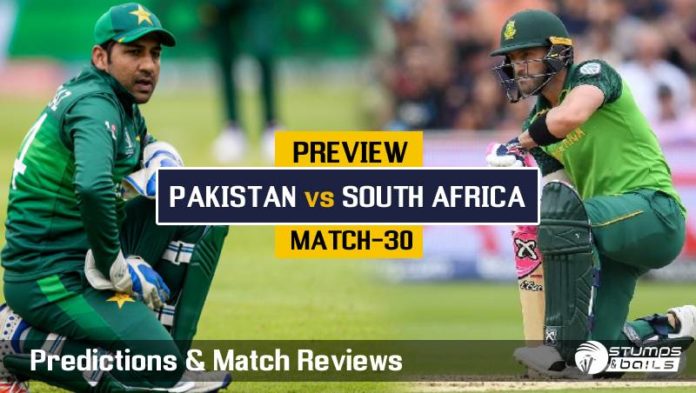 Pakistan team has been in total chaos over the past week or so. After their loss to India, their media and fans have gone hard at them on social media which could be mentally draining if you are a player. The strength of the Pakistan team is how they bounce back mentally in this all-important game. The captain Sarfaraz Ahmed who has been the most criticized needs to rally his players and get them to perform to their best against another team who have been struggling as well.

The biggest problem for Pakistan has been that except for Mohammad Amir, the rest of the bowling has looked pedestrian. Their batting also hasn’t been consistent enough to post good total consistently. Shadab Khan their lone specialist spinner hasn’t recovered his form completely which means there is a lot of room for improvement in the bowling department. There may few changes for Pakistan for this game which means that Mohammad Hasnain may come in for Hasan Ali and Haris Sohail for Shoaib Malik. They would also need some new ball wickets from their pacers which have been a problem for Pakistan in this tournament as they have conceded two back to back 100 run opening stands.

South Africa though face similar issues to their opponents. Even though their bowling looked like coming together in the last game the batting issues still exist. The lack of form from some of South Africa’s experienced players is what is causing them all the issues. Hashim Amla at the top has been struggling and their younger players seem to be performing much better so far. Faf du Plessis will know that even though their qualification chances are slim, they need to keep the hopes up and get the wins on the board as the tournament now has opened up some new possibilities. He obviously needs some help from the senior players in the batting which includes David Miller who has been struggling through this tournament.

South Africa has had the upper hand over Pakistan in ODIs historically and in the world cup, it hasn’t been much different. They have a 3-1 W/L record against Pakistan with their only loss coming in 2015 WC in Australia.

Kagiso Rabada (South Africa): South Africa’s bowling had multiple setbacks but Rabada has been in excellent form bowling his heart out through the tournament. He will once again be crucial against the Pakistan top order in this game. He does have the support of Lungi Ngidi which will be a huge boost to the genial pacer.

Rassie van der Dussen (South Africa): While there are some big names in the South African batting line up, van der Dussen has been the standout player for South Africa. He played a crucial hand in that heartbreaking loss against New Zealand and seems like the only batter beside Quinton de Kock to be in some sort of form.

Mohammad Amir (Pakistan): Mohammad Amir already has 13 wickets in this tournament at an average of just over 13. He has been brilliant with the ball but hasn’t received much support from rest of the attack so far. The one thing Amir would want to do is get some wickets with the new ball which has been missing from his tally so far in this tournament.

Fakhar Zaman (Pakistan): The Pakistan batting has a one-dimensional look to it. Except for Fakhar Zaman, none of the other batters have another gear. He will once again be required to provide Pakistan with a good start against some good quick South African bowling attack.

“We’ve sort of tried to sort of put all our focus completely on to us going forward. And if there’s an outside chance of qualifying that’ll be incredible. But we’ve done our bit of sulking and moping around. The energies now since we’ve been here has been really good. The families arrived yesterday so the guys are feeling slightly more refreshed and ready for the next three games.” Said Aiden Markram regarding South Africa’s approach for the rest of the tournament.

“I have said before that cricket is such a game that it takes you high one day and then you fall the other day. I have always tried to keep myself in the same position. I am like I am before. I have been with people who have kept me humble and down to earth.” Said Sarfaraz Ahmed about the change in fortunes of his team who have seen the highs of Champions Trophy win in 2017.

This is one of the games which is really hard to call. Both teams have gone through an emotional week in this tournament and need to pick themselves up to be competitive again. Pakistan has been battered relentlessly over the last week and it would take lots of character from their players to turn this around. This game will be won on the field and the bowling. Whichever team bowls well and fields better will have the advantage. The batting of both teams is inconsistent