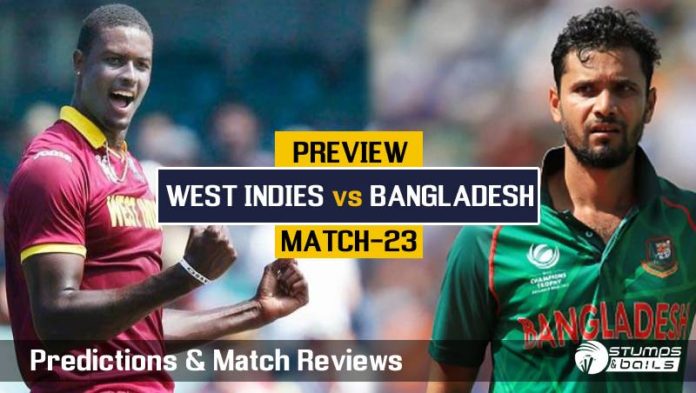 West Indies and Bangladesh both had a great start to their World Cup campaign. Both won their first game easily and were looking brilliant at the start. Things though haven’t gone as planned after that game for either side. West Indies had that close loss against Australia and had their game rained off against South Africa but their loss against England will bother them a lot. Nothing went right for them. Their batting struggled and their bowling wasn’t able to make an impact on the opposition batting.

The biggest problem for the West Indies has been the one-dimensional nature of their XI. They don’t alter their game based on the situation on hand which means that against stronger oppositions they are going to struggle. After getting to a good position against England they threw their wickets away and things were never the same and a target of just over 200 was never going to trouble England. Their bowling as well as one dimensional and it seems like they don’t have a plan B to their bouncer strategy. When they have to bowl regular lengths they struggle, allowing the opposition lots of freebies to score off. West Indies would know that they surely need to fix these flaws if they need to seriously think about the semi-final spot.

Bangladesh has had similar issues to the West Indies. Their batting has struggled except for Shakib Al Hasan but their biggest worry is their bowling attack. Their pace bowling stocks aren’t the best and with their captain struggling for wickets, the rest of the attack hasn’t been able to make an impact. Mustafizur Rahman has been under great pressure to deliver and he has struggled so far with the ball. The Bangladesh batting especially the openers have also struggled for consistency and the batting of Shakib has kept them afloat till now. They will be subject to some intimidating bowling from West Indies in this game and would need to negotiate the new ball better if Bangladesh has to challenge the West Indies.

The early starts to the game and the pitches being little green have neutralized Bangladesh Spinners and they haven’t been able to make an impact as well so far in the tournament.

Even though Bangladesh has historically not done that bad against West Indies in ODIs, the men in maroon still have an edge over the Tigers. In the World Cup though, West Indies have a 3-0 record and are yet to lose to Bangladesh.

Shai Hope (West Indies): West Indies batting has been far too one dimensional without any planning. Shai Hope who has been their best ODI player is the only one in the line up who could play differently according to the situation of the game. He averages 50+ in ODIs and following two big hitters at the top, he will be required to provide the sanity which West Indies batting needs.

Sheldon Cottrell(West Indies): Cottrell is probably the kind of bowler who can utilize the English conditions perfectly. He doesn’t rely too much on the short ball strategy and can actually swing the new ball. West Indies need someone to break away from their strategy to provide them with some variety and Cottrell will be the one to do so.

Mushfiqur Rahim (Bangladesh): Bangladesh batting has been in tatters in this world cup except for that one game against South Africa. Mushfiqur Rahim is their best batter in ODIs along with Tamim Iqbal. He will be an important part of their batting resurgence and to help his team post a good total when batting first.

Shakib Al Hasan (Bangladesh): Shakib has been in great form with the bat this tournament. He has already scored a couple of the fifties and a hundred so far. The biggest problem for Bangladesh has been their bowling and this is where they have struggled so far in this tournament. Shakib as a bowler has been missing so far and he would be hoping to get his form back. Considering West Indies’s struggle against spin, his bowling will be crucial.

“We normally try to simulate in the nets what our opponents are likely to do. They usually target us with the short ball but they do the same against all sides in the first ten to 15 overs. They also give run-scoring opportunities. We have to prepare for both, that’s why we are working hard in practice.” Said Tamim Iqbal about the West Indies short ball tactics.

“If you want to put us in the underdog category, fair enough. We’ve played them quite a bit in the recent past and they’ve gotten the better of us in recent past. Like I said, different stage, lots at stake for this game. We’re all up for it,” said Holder about their recent losses against Bangladesh.

This game is almost important to call. Both teams have their flaws and need to rise above those shortcomings to stage a comeback in this tournament. If we are to go by the recent track record, Bangladesh has clearly done better against West Indies in the shorter formats which probably gives them a slight edge.