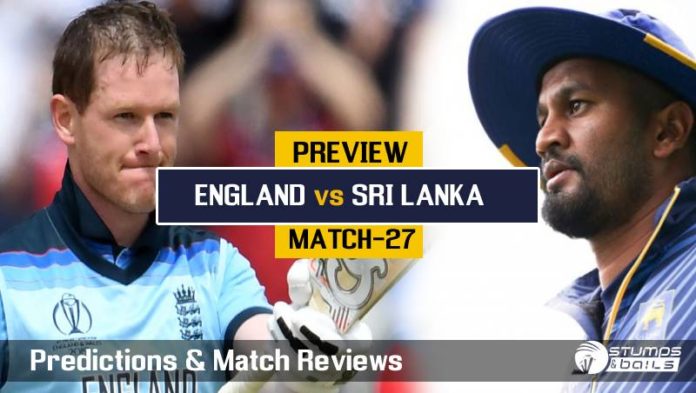 You will not find two teams so much on the opposite end of the spectrum in terms of confidence as it is with England and Sri Lanka. England is the favourites and has so far played as one but Sri Lanka, on the other hand, hasn’t looked anything close to a team who have won a World Cup in the past. Sri Lanka has been on a downward spiral for quite some time now and it just doesn’t seem to get better for them. This World Cup has been a reflection of the struggles of a team who aren’t able to rise above the issues they have at hand.

The weather hasn’t been very kind either for Sri Lanka. They have had two rained off games and their only win came against a struggling Afghanistan team. Their batting has been an issue and their 87 run loss to Australia confirmed their struggles. The bowling attack against Afghanistan did a good job defending a low total which is probably their only solace in this competition. They will once again depend on the experience of players like Thisara Perera, Angelo Mathews, and Lasith Malinga to pull them out of the rut and will be hoping for a turn around against a confident England team.

There are no such worries for England though in this World Cup. They just had one blip with a loss to Pakistan but again they have bounced back brilliantly since then. Their batting suffered a set back with an injury to Jason Roy but again they have James Vince for cover and a powerful batting line up to boot. Their bowling has been doing well and the pacers have been in good form. The spin bowling is a concern but again they have two good spinners in their midst who should take advantage of they have conditions which suit them.

There hasn’t been much between the two teams in ODIs historically as England just have a minute advantage over Sri Lanka. Even in the World Cups, the advantage for England is slim with a 6-4 W/L record.

Jofra Archer (England): Archer has been the star for England this world cup. He had been their X-Factor and has for sure justified the hype with his bowling so far. With the Sri Lankan batting struggling he will be the one to trouble them a lot with the new ball. He can be really lethal with his pace against a team who is not that confident right now.

Joe Root (England): Joe Root has been England’s best batsman for a while now and at the crucial number 3 spot he has provided his team with great solidity so far. With a new opening pair in the absence of Jason Roy, Root at number 3 becomes most important if an early wicket falls.

Lasith Malinga (Sri Lanka): Malinga hasn’t been Sri Lanka’s best bowler recently nor has he been in greatest of forms but again he needs to be in the forefront if his team has to turn this around. Malinga has had success against England in the past and against a powerful batting line up wickets at the top will be crucial and Malinga needs to be the one with the new ball.

Angelo Mathews (Sri Lanka): Mathews is similar to Malinga, the most experienced batter in the XI but terribly out of form. This game probably will make or break Sri Lanka’s chances in this tournament and Mathews needs to stand up for to be counted. He will be important to not only score runs but to also stamp his authority on a good English attack.

“We discussed lots the mindset, you know, and no point talking about the past matches. And already we know what happened with the last four matches and, you know, what are the areas, what are the key areas where the main thing is we lost those matches and we need to have a good mindset and prepare the England game. There are four games left so we have to play a good, play good, positive cricket with a good mindset.” – Dimuth Karunaratne trying to be positive ahead of an important game.

“Our mindset has been to not take the foot off the gas: every game we play like it’s our last game,” said Moeen Ali, who confirms England aren’t taking Sri Lanka lightly. “Obviously we have the enjoyment and stuff, but every game is huge and, as I said, we all know as players this is the last World Cup as a team that we’ll be together at home. So let’s make the most of it. Every game counts.

Sri Lanka has a bee in such a turmoil that they felt the need to complain about the pitches and staying arrangements for this World Cup. This shows that things aren’t exactly fine within the camp no matter what the captain says. Despite all these issues, Sri Lanka needs to rise above the problems they have to even come close to England in today’s game. England is a brilliant ODI side who are in brilliant form and Sri Lanka I am afraid to have very little chance of causing an upset. Even though you feel that Sri Lanka might do well, England is a way too powerful to not win this game easily.