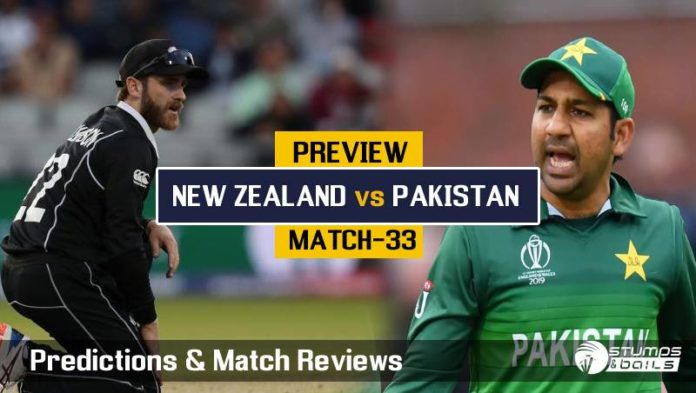 The campaign which seemed done and dusted after that hammering against India for Pakistan suddenly saw a light when Sri Lanka surprised the hosts England. Pakistan then went on to beat a struggling South Africa which has given them a lifeline to make another push towards the semi-final berth. Pakistan seemed to have finally found their right batting combination in the game against South Africa. Haris Sohail who replaced Shoaib Malik played brilliantly in the middle overs to propel Pakistan over 300 in a game where it felt they have once again squandered a good start. The bowling also was good with Mohammad Amir taking wickets again. Shadab Khan finally took some wickets and ended up with a 3-for which will delight the Pakistan camp.

Pakistan isn’t expected to make any changes to their XI which defeated South Africa. They would though hope the openers take a little bit more responsibility after getting off to a good start. Their new ball attack took some wickets at the start which would also be something which would have pleased the captain and the coach.

New Zealand though has been brilliant and are yet to lose a game in this World Cup. Their bowling and fielding have been brilliant but they would be concerned about their opening combination. The pressure on Kane Williamson and Ross Taylor has been enormous in this tournament. Kane Williamson has been brilliant but he would want his openers to contribute a bit more at the start. Colin Munro who has been struggling might be the only one who in danger of being dropped if at all the Kiwis want to make a change. Their bowling attack has done well but considering the nature of the wickets and the weather Ish Sodhi might get a look in as well along with Mitchell Santner. New Zealand has done well but not without their problems.

Pakistan holds the edge in the head to head record historically and in the World Cup as they lead 6-2 in the marquee tournament. In the last 7 games between the two teams, New Zealand has a 6-1 advantage.

Kane Williamson (New Zealand): With struggling openers, Williamson has been under tremendous pressure but has delivered so far with two brilliant hundreds. If the opening combination fails again, he will be required to anchor the innings once again. He is the most important member of the batting line up and someone who will be a target for the opposition.

Trent Boult (New Zealand): Pakistan’s strength is their top three. All three of them have been in good form and the openers in the past game added 80 odd for the first wicket. Trent Boult has been brilliant with the new ball and has been providing breakthrough at the top. He will be looking to attack the Pakistan top three as he did in 2018 when he tormented their batting line up.

Haris Sohail (Pakistan): Everyone in Pakistan wanted Haris Sohail in the XI and he proved why with a swashbuckling 89 of just 59 balls against South Africa. His innings was breath of fresh air in a team who are pretty much same in terms of how they bat in the middle overs.

Mohammad Amir (Pakistan): Amir is Pakistan’s best bowler in this tournament and has been brilliant so far. Considering the strength of New Zealand is their number 3 and 4 he will be crucial in breaking through early and getting in Kane Williamson against the new ball. The rest of the Pakistan attack hasn’t been as good as him in this tournament.

“We need to be consistent with our selections now, we have to back our players even if there are some iffy performances. So we won’t just drop Shaheen [Afridi] to play Hasnain. We’ll see if we need to play four seamers on the morning of the match but not otherwise” Said bowling coach Azhar Mahmood regarding the selection of Shaheen Shah Afridi

“Considering we haven’t done it yet, so that [winning the World Cup] would be nice. We’re in a pretty good situation but we don’t want to get ahead of ourselves. For us, it’s about getting into the next game, which is Pakistan, do our scouting and accordingly be at our best come tomorrow” Said Mitchell Santner, talking about the focus of New Zealand team.

This is a pressure game for Pakistan and a must win for them to keep their hopes alive. A loss here would mean their chances go down and due to their inferior run rate, they would struggle to make the final four. For New Zealand though any win from here on is to try and compete to finish at the top of the table. They have qualified for the semi-finals and it would be extremely unlikely that they wouldn’t be in the final four. The form and strength of the team point to New Zealand but Pakistan can be really dangerous on their day and cannot be written off. This will be an interesting game with New Zealand having the edge.