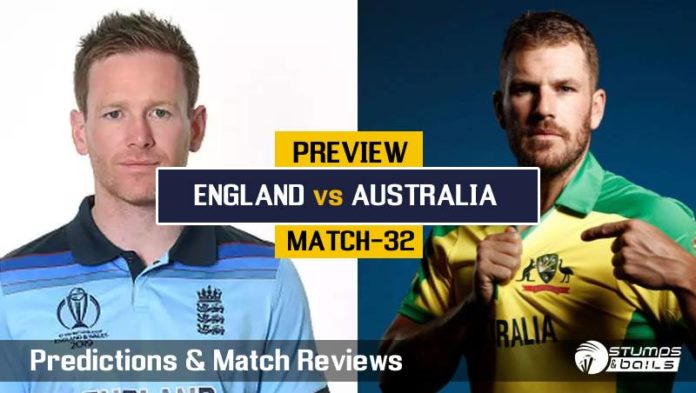 The favourites and world number ODI team England hit a major blip in their World Cup campaign when they lost to Sri Lanka last week. They now have 8 points with three more games to go and winning this game against Australia has become more crucial than ever. With teams like Pakistan, Sri Lanka and Bangladesh breathing down their neck they would like to distance themselves from the pack with a convincing win.

It is not going to be easy for England as their next three games are with the top 3 in the table. Their batting completely lost the plot against Sri Lanka chasing a below par total of 232. Their openers got out soon and their middle order caved under pressure. The only positive in that game was the batting of Ben Stokes. The captaincy of Eoin Morgan also was little confusing as he held back his pacers who did not complete their over despite them taking majority of the wickets. England have now lost two games which they should have won due to wrong planning and calculation. Another slip might just end their chances of making the semi finals easily.

Australia though have been in great form. Their batting has been firing and their bowling has done reasonably well. Their problem through the tournament has been the back up for Pat Cummins and Mitchell Starc. The rest of the bowling unit hasn’t been able to stand up to be counted too often in this tournament. It will be interesting if they will make any changes. Considering how the pitches have been recently in combination with the weather in England Nathan Lyon might get his shoe in for this important clash. In terms of batting Australia are not expected to make any changes.

Australia have a massive lead in the head to head between these two nations and that translates into the world cup as well where they have a 5-2 advantage.

Mitchell Starc (Australia): England showed against Sri Lanka that even though they have a long batting line up, their top 4 are their batting lynchpins. Mitchell Starc has been good with the new ball for Australia and he will be crucial in getting some early breakthroughs for the Aussies. The England openers have been short in confidence so Starc would be expected to take advantage.

Jofra Archer (England): Archer’s selection was met with lots of controversies before the start of the world cup but again he has reprised the faith in him by taking 15;wickets in 6 games. He is the joint highest wicket taker in this tournament and once again will be their Trump card. The Aussies haven’t played him before so would be looking to take advantage of the fact.

Jonny Bairstow (England): Bairstow is a crucial cog in England’s batting and his form will be worrying for the team management. They are already missing Jason Roy and Bairstow would be required to pick up the pieces at the start and contribute against a good new ball attack of the Aussies. His runs at the top will be important for England to put up a good total in this crucial game.

“I would never use the position I’m in to influence fans or try to change the game in some way. They have committed something and they have served their penalty. It doesn’t necessarily mean they are welcomed back with open arms into the cricket community.” Said captain Eoin Morgan about the English crowd booing David Warner and Steven Smith.

“When you look at England over the last four years they’ve been bloody consistent, so you can’t read a huge amount into it,” Aaron Finch talking about England’s loss to Sri Lanka.

England are under tremendous pressure right now in this tournament and they would have hoped to be in a better situation than they find themselves in. The one thing which will give them confidence is the success they have had against Australia in recent times. They have won 9 out of the last 10 games they have played against the Aussies. The Australian team they played last year was vastly different to the one they will be taking on in this important encounter though. This is another game which will be tough to call but going by the confidence and recent form, the Aussies probably have the edge.