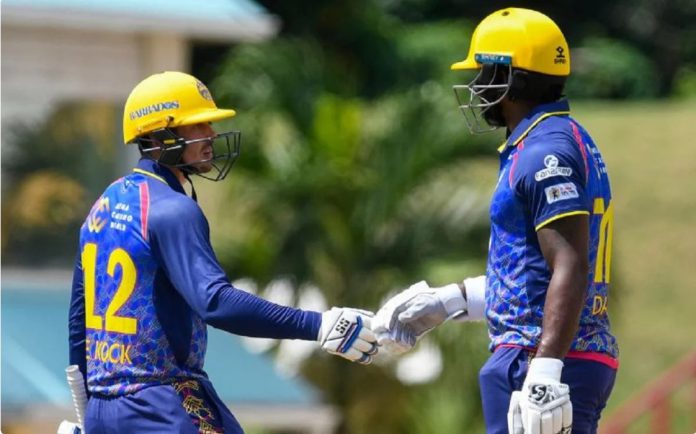 Kyle Mayers hit a superb 36-ball 79 and Mujeeb Ur Zadran took three wickets as Barbados Royals defeated Trinbago Knight Riders by eight wickets in a CPL 2022 game played in Port of Spain. In 16 overs, the Royals chased down the target of 133.

In pursuit of the modest target, the Royals lost Rahkeem Cornwall early in the second over, to Daryn Dupavillion. Mayers and Corbin Bosch, on the other hand, laid the groundwork with a 98-run partnership for the second wicket. Mayers, in particular, went for the kill in the third over, tonking Ravi Rampaul for two boundaries and a six. Mayers then whipped and pulled Jayden Seales.

Mayers met Kieron Pollard’s entrance into the assault with a couple of hits that reached the boundary rope. In the 12th over, he succumbed to a full toss from Dupavillion. When Mayers was dismissed, the Royals needed only 25 runs in eight overs and had eight wickets in hand. Bosch and Quinton de Kock duly led the team across the finish line.

Mujeeb, Cornwall, Jason Holder, and Obed McCoy shared nine of the ten wickets that fell, laying the groundwork for the Royals’ victory. Mujeeb and Cornwall, in particular, performed critical roles by taking the first four wickets to fall, leaving the Knight Riders in difficulty at 37 for 4.

Nicholas Pooran (52 off 43) and Sunil Narine (30 off 31) attempted to rescue the innings, but Obed McCoy and Mujeeb combined to dismiss Pooran and Narine in four deliveries, putting Knight Riders in even deeper danger. In fact, after the loss of Pooran, Knight Riders scored only 25 runs in 25 balls and finished with a below-par total.

The Royals lead the points table after winning all six of their games thus far. Knight Riders, on the other hand, are at the bottom of the standings, with only one win in five games.