Colombo Kings will be up against Dambulla Viikings in Match 7 of the Lankan Premier League. The match will be played at 3:30 PM on Tuesday, December 1 at Mahinda Rajapaksa International Stadium in Hambantota. Here are CK vs DV Dream11 Predictions, Preview, Full Squad, and Predicted XI.

Colombo Kings have made a firm start to their campaign sharing top-spot with Jaffna Stallions. Colombo Kings have maintained a perfect record in the two games they have featured in the season so far. Andre Russel, Isuru Udana, and Dinesh Chandimal have taken charge on different occasions to set a solid platform for the Kings in the on-going season. However, Kings are up for a gruelling task in their clash against Dambulla Viikings.

Dambulla Viikings are currently placed fifth in the points table with a win and a loss in two games they have played in the season so far. Dambulla Viikings have some match-winners in their squad in the names of Dasun Shanaka and Angelo Perera. However, they will need to get their A-game in front of the Kings. 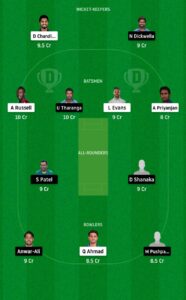 Our CK vs DV Dream11 prediction is that CK will win the game.

Disclaimer: Please note that our Dream11 predictions are based on our own analysis and do guarantees positive results.